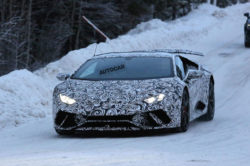 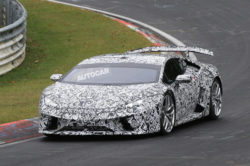 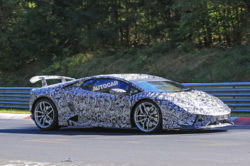 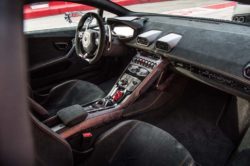 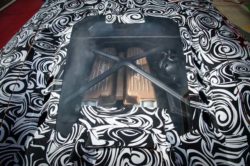 The Huracan has been around for nearly 3 years but Lamborghini has yet to release a higher performance version for the car. Most publications expected the Lamborghini Huracan Performante to launch at the Geneva Motor Show. Well, these are not just expectations. Not that long ago the car has been confirmed to be released at Geneva. From the early details it seems very impressive and some even called it the fastest Lamborghini to date. This is a bit far-fetched, especially since cars like the Aventador SV or the Sesto Elemento are known to be incredibly fast for how much power they make.

It seems that it was an internal fight at Lamborghini about the name of the car. Some wanted to call it the Superleggera in a similar way to the older Gallardo. However, its chief engineer opposed that name because the Huracan Performante is all about performance and not lightness.

Even though this is the case, it seems that the car is between 90 and 220 pounds lighter than the regular version. This has been achieved by removing all the unnecessary items from the interior, lighter materials and heavier use of carbon fiber. The price is still unknown but considering the technology that went into it, we wouldn’t be surprised if it would cost in excess of $100,000 over the price of a regular Huracan.

It seems that the Lamborghini Huracan Performante will be very similar to the regular car. So far they haven’t released an official picture but the camouflaged prototypes have been around for quite some time. The front end seems to make use of a new splitter and what it seems to be an active air intake. While most of the car is the same, it is quite clear that the Performante features a special rear wing.

Considering its size many thought that it was nothing more than just a fixed wing at first. While this is true, it is not the entire story about it. The car features a rear active wing which is hollow. Because of that it can channel air that enters through the side intakes and exits through one of the three exhausts mounted in the wing. Thanks to that the car can actively channel the air without having to rely on slow hydraulics. Its brand new “air-wing”, dubbed by Lamborghini as “ALA” will work between 43 and 193 MPH.

The interior of Huracan Performante

Not much has been said about the cabin of the Lamborghini Huracan Performante. Despite that, considering it is a lightweight version of the car, it is expected to do without some creature comforts.

The Huracan Performante is going to use the same 5.2 liter naturally aspirated V10 engine as the regular model. There have been some rumors about it receiving more power thanks to a revised exhaust system. The car will make over 610 horsepower and it seems it might offer close to 450 lb-ft of torque. The seven speed dual-clutch automatic is going to be revised in order to make better use of the extra power.

Thanks to it, the car should be able to hit 60 MPH in less than 2.8 seconds and hit a maximum top speed of around 200 MPH. Thanks to all these upgrades, the Performante managed to put out a faster lap-time around the Nurburgrind than the Aventador SV which is very impressive. This was mostly thanks to its brand new active-aerodynamics system and considerably lower weight over the original.

The Gallardo has been the best selling Lamborghini ever made but it seems that this is about to change. Its …