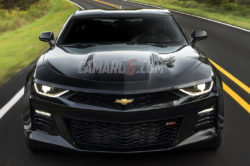 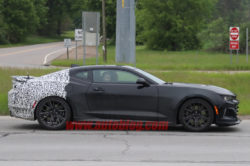 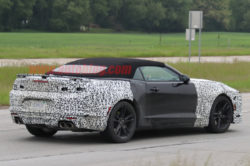 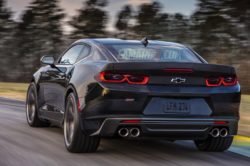 If you asked us what should be changed on current Camaro, we would exclaim nothing! If you are into some nitpicking go nag about absolute lack of visibility or shortage of cubbyholes, but first, find someone who cares. More important thing is certainly the fact that Camaro ZL1 1LE is a faster thing on the track than 911 Turbo S, 488 GTB or Aventador… Still, Chevy doesn’t know how to relax and according to caught test mules, it has no intention of skipping the usual mid-life update. 2019 Chevrolet Camaro is destined to bring some novelties, presumably debuting during next year and probably keeping current pricing strategy ranging from $27k to $70k in a case of the roof-less version of ZL1 model.

Spy photographs caught the whole array of test mules depicting everything from the base model, over to SS one, ending with ZL1, while you can see both masked coupes and convertibles shapes of future 2019 Chevrolet Camaro. Whatever is covered, it is padded with so much cladding that we are not even going to try to decipher what lies underneath. But there is a catch.

ZL1 version doesn’t have its fascia covered as it looks the same, only tail is concealed, possibly causing confusion that only changes at the back are set to arrive, while front camouflage on others models is just a trick. But, it’s not. You saw that recent facelift for Mustang avoided meddling with GT350 and GT350R versions leaving them intact, so expect half of the same story in case of ZL1. More precisely, present fascia stays, but back end doesn’t. As far as cabin goes, not even one photo of it exists, so we’ll avoid that part of the story for now.

Don’t be greedy, for God sake! ZL1 boost 650 hp from supercharged 6.2-liter V8… Ok, we know, Hellcat has 707 hp, Demon 840 hp, but both of those are treating available power as if they are kids walking down the streets with the full-grown lions on a dog leash. The problem might be the Mustang. Shelby GT500 version is yet to arrive, and predecessor delivered no less than 671 hp. The new one will touch 700 hp boundary be sure of that, while this Ford will be actually capable of restraining itself from the desire of murdering you in every corner. In other words, it will manage to put under control (at least partially) power at its disposal, unlike the berserk Dodges.

Yet, don’t expect this refresh to bring significantly more power for ZL1. That means that Chevy will drop to the bottom of the muscle car horsepower list when mentioned Ford arrives, but we don’t see that version hurting is supreme lap time figures. Besides top engine offer, 2.0-liter turbocharged L4 might see some numerals rise from 275 hp, same goes for 3.6-liter naturally aspirated V6 rated at 335 hp, and presumably similar is possible for 6.2-liter naturally aspirated V8 currently at 455 hp in case of SS version. The bigger novelty would be the fact that 10-speed automatic from ZL1 becomes the norm for the whole lineup replacing previous 8-speed one.

So, we mentioned that ZL1 1LE is faster on the circuit tarmac than seven times more expensive supercars. Normally, that also means it is way faster than Shelby GT350R (even without 1LE package) which is Ford’s view of the street legal racing monster. Despite 1LE is a track intended package it was never envisioned as a replacement for Z/28. You remember that one? Sure you do… That is going to be true and hard-core track-oriented version of the Camaro when it arrives possibly with the refresh in question.

That now sounds silly as ZL1 1LE generates 1.18 of lateral g, it features more than plenty of aero gimmicky and sits absolutely nailed to the ground with extremely firmly tuned spool-valve dampers… But Chevy plans better than that, and if we cant foresee how, we do know that, without that heavy rear bench, hefty climate control, bulky infotainment system, and weighty floor carpets, we are all capable of living without. So, weight down, lap times up, right? Expect it to produce significantly more than 505 hp as in the past, we’ll see from what mill, and this is just going to be ridiculous. It might even break the 7 minutes boundary on Nurburgring. Camaro?! Skies will burn for sure…