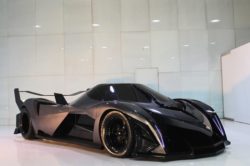 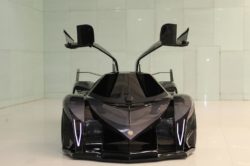 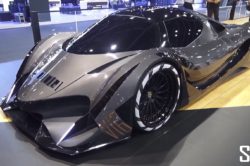 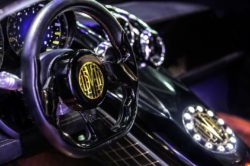 A few years ago a small company from Dubai released a concept with the Devel Sixteen. At the time they said they will make a car capable of achieving 300 MPH but not many people believed them. Well, more than 4 years later the same company released the 2018 Devel Sixteen. Even though the car is still not ready for production, it is pretty much complete when it comes to its development process. This time around there is a real engine backing it up and the car features a usable interior too. While the design might seem strange, the new Devel is a really unique vehicle which will definitely make a few people fall in love with it. For starters, unlike most hyper-cars out there, the Devel has been made with on idea in mind, to become the fastest production car ever made.

In order to achieve this, the manufacturer had to make a few compromises. For starters, this will never drive like a McLaren P1 around a track. The wheelbase is incredibly long for what it is and the car is quite long too. However, the car is not nearly as wide or as tall as some people suggested it would have to be.

Instead, Devel tried their best in order to basically create a production dragster with enough power behind the front seats to reach amazing top speeds. Unfortunately the car’s performance is still well under wraps but we hope things will change in the near future.

For now it looks like the 2018 Devel Sixteen may hit the market some time in the late 2018. However, it still is unclear as to how the manufacturer will handle the orders. It is likely they will take full payments in advance before delivering the car. Also, its price, while still unknown, is likely going to be well over $5 million which would make it one of the most expensive production cars ever made.

The most impressive fact about the 2018 Devel Sixteen, and the reason why so many people are interested in it, has to be its engine. This is a 12.3 liter V16 quad-turbocharged gasoline engine made by Miller Engines. Despite what some said, they actually designed the engine from the ground up. Some parts are based on the GM LS design but the block, internals and most of the other parts on top of the engine, such as the cylinder heads, are unique to it. This quad-turbocharged engine will provide a highly impressive 5,007 horsepower and 3,519 lb-ft of torque which would easily make the Devel the most powerful production car ever to be sold. This amount of power will be sent to the rear wheels via a drag-style 4 speed automatic. It looks like the gearbox will be the sole limiting factor for this application when it comes to its maximum top speed. Most rumors seem to suggest a top speed of around 310 MPH which would still be highly impressive. Chances are the car will be capable of considerably more, especially since it features a drag-like design that would do great on the salt flats.

As we have said, the 2018 Devel Sixteen has a unique design scheme which definitely stands out from the rest of the cars out there. The really long and slim look is quite impressive and it definitely makes the car stand out.

In the front the car features a massive splitter alongside a large intake while on the sides and on the top there are intakes meant to feed the massive engine fresh air. There is also a small adaptive rear wing but this is likely there solely to be used as an air-brake. A real interesting quirk has to be the rear exhaust. The car features jet-like tailpipes which is something we haven’t seen since the ‘60s.

While the exterior and engine are highly impressive, the cabin of the Devel is not nearly as cool as the rest of the car. While at first the prototype definitely had a placeholder dashboard, the new model is quite similar to the Koenigsegg Agera R. Even though this is not necessarily bad, we would have hoped for the company to make something a bit more unique, especially since it is going to cost a lot of money.