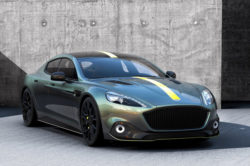 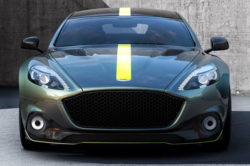 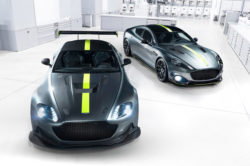 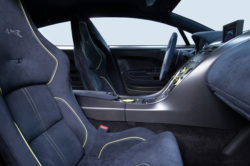 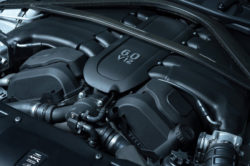 There are quite a few luxury sedans out there but the Rapide has to take the cake as the boldest of them all. In order to create this four-door sedan Aston Martin basically elongated the chassis of the Vanquish and added two more doors into the mix. The end result has to be one of the most striking cars out there and also one of the largest. The current version has been revealed for the 2014 model year and since then it has been constantly improved. The price now sits at nearly $210,000 for a base version. Aston Martin can also offer a customizing program which will allow the buyer to give the car its own personal touch. This program will take the cost of the Rapide S to well over $300,000.

However, while the car is great, it is quite old at this point. In order to make it go out with a bang they just revealed the 2018 Aston Martin Rapide AMR. The AMR in its name actually represents Aston Martin’s performance sub-brand which has been launched with the new car.

Unlike the previous AMR Pro models, the AMR brand will be applied to vehicles sporting mild modifications. These are going to be developed in-house by Aston Martin, unlike with the AMR Pro models. The price is still unknown but considering the upgrades, we would expect at least $10,000 over the regular S version.

The 2018 Aston Martin Rapide AMR manages to combine a bit of everything. Despite being a luxury car, it doesn’t really look like one. Also, the AMR upgrades give it a much more aggressive look which make it seem a bit more like a four-door super-car. The front end is all new. Here they added a taller and wider grille, a massive splitter and round fog-lamps surrounded by quite a bit of carbon fiber.

The side skirts are wider than before while the rear of the car features a larger diffuser and also quad-exhausts. In order to stand out even more, the AMR comes with a unique gray color scheme with lime green accents. These can be found on the splitter, side skirts, rear diffuser, the stripe that runs across the entire length of the car or even the brake calipers.

The changes here have been kept to a minimum so the car is mostly identical to the regular model. There are some upgraded materials though which do make it that much more special.

The seats are covered in Alcantara and feature color accents that mimic its exterior. Also, most of the inserts around the cabin have been replaced with carbon fiber, so it should feel a lot sportier than before.

Here the 2018 Aston Martin Rapide AMR will come with the same engine as the regular S model. This means it will boast a 6 liter naturally aspirated V12 petrol engines. This has been tweaked for the AMR version to deliver a rather impressive 592 horsepower which is very good for a naturally aspirated mill. So far it seems that the only real changes over the regular car are the new freer flowing exhaust system and possibly a new ECU software.

With the extra power, the AMR Rapide should be capable to reach a maximum top speed of 210 MPH which makes it one of the fastest sedans around. The 0 to 60 MPH time will likely drop to under 4 seconds. Unfortunately the car will still be available only as a rear wheel drive model. This will make it inaccessible for some markets but it shouldn’t be just a big issue considering  will be building less than 500 a year.

Ferrari was always all about the racing. In 1983 288 GTO was born, purely as a homologation series necessary was …