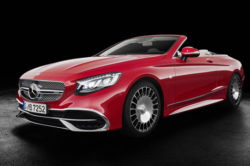 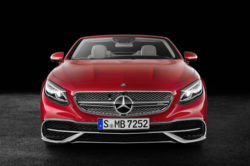 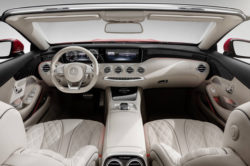 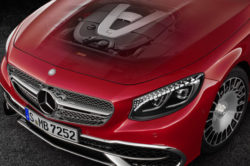 Unveiled on 16th this month, in Los Angeles. The car will be 2018 model and it will probably reach global market later next year, but won’t be put in mass production, as already explained.

Deep red mahogany on the panel, smell of the leather on the seats, shiny aluminum batters, wide display, modern console, Burmester sound system… everything about this car is striking, impressive.

The comfort of the Mercedes vehicles is one of their most distinctive characteristics, so we imagine driving in this car be…Godlike.

The Mercedes-Maybach versions of S class models include even longer wheelbase than usual long-wheelbase sedan. Comparing to S600 sedan version, nothing essential has been changed. S650 Convertible has two door, LED taillights and a lot of chrome and Maybach badges. Generally it looks more powerful and even more luxurious.

The car is likely to be powered by the same engine as previous S600 model only tuned up to 6.0-litre biturbo V-12 version that makes 621hp, and accelerates 0-62 mph in 4.1 sec. Besides the fact that you have to give serious ammount of money to buy this car, you have give a serious fortune on a daily basis for fueling it- the consumption is 23.5 mpg.

The previous model, S600, has an engine that is paired to 7 G-Tronic automatic transmissions, and S650 will get the same one too. This engine is currently topping the range, but rumor has it Maybach S650 will get the significant boost of power to match its super posh visual.