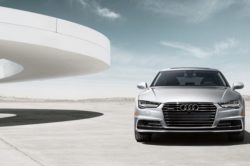 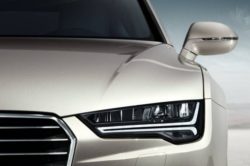 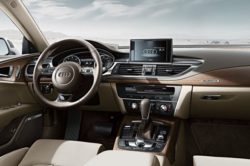 Audi rarely manages to make a blow with its design approach. It is usually very evolutionary inclined and rarely does it make big leaps forward. Still, from time to time Ingolstadt do make our jaws drop. Remember first TT or first R8 or even first A5. Feel free to squeeze A7 into the same bunch. Yes, its design it’s not groundbreaking, but neither is one featured on any brand’s products, and usual and omnipresent “Audiness” stylistic approach is in full swing, but it just happens to work so perfectly for this one. This mid-size luxury blend of coupe and sedan is seven years old, but we do claim that 2018 Audi A7 still has plenty to tell about itself.

After so much time spent on the market A7 just doesn’t look obsolete at all. There is not even one line appearing excessive, and not even one crease that seems vulgar. It is immaculate in its elegance, and sophisticated fastback shaped tail sprinkles just enough dosage of flair.

Satisfying feelings of modernity are sustained by neat LED lights front and back, which received a perfect dose of sharpness with the mid-life refresh in 2014. Heck, this could be even pretties Audi’s product currently on offer. Plus, if you prefer to gently, but still put, a bit more emphasis on sportier side of your sedan, S letter brings the cure, while if you want to shout about under the hood volcano, RS does the deal.

As for the cabin, it always easy to turn a blind eye on the birth date when Audi is in question. Impeccable build quality and meticulously chosen materials don’t have an expiration date and restrained elegance usually age well. Sadly, tech gadgetry doesn’t. 8-inch infotainment system doesn’t respond to touch and instead of Virtual Cockpit, you’ll get 7-inch display between analog instruments.

Still, the possibility of customizing this beauty to your personal palate might just alleviate tech sorrow, as thirteen different leather upholsteries wrap around three different types of seats, which sits in front of the dash prone to be decorated with three different sorts of veneers. And the boot is enormous, and there goes another nod to alluring fastback shape.

There is not much choice there with this A7, but at least available one is more than decent. This Audi comes with one engine, 3.0-liter V6 boosting 340 hp and 325 lb-ft of torque, paired with 8-speed automatic, which is all enough for reaching 60 mph in brisk 4.7 seconds. That acceleration time also comes visibly faster than one offered by V6 versions of Mercedes CLS and BMW 6 Series Gran Coupe. Beware, if you fancy supercharger’s way of the air molestation better hurry and get this V6 as Audi is ditching those in favor of prevailing turbochargers. For the end, each A7 comes standard with Quattro AWD system, and it proves frugal to your wallet giving the capability of achieving 24 mpg combined of fuel efficiency.

NEW ONE IS AROUND THE CORNER?

A new generation of Audi A7 is around the corner yes, but as you saw 2018 Audi A7 is alive and kicking. It doesn’t come as generally cheap with $69,7k starting price tag, but it comes as aged wine. Smooth, well balanced and palatable. And guess what? Those three attributes are the exact words that describe its driving demeanor. And Competition package offers torque vectoring at the rear. So, no you don’t have to wait for the replacement, go and get one if this all sounded promising enough. You want more? It comes five grand cheaper than Merc’s CLS and even ten grand than Beemer’s 6 Series Gran Coupe.