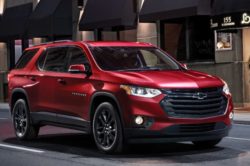 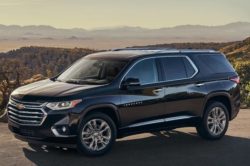 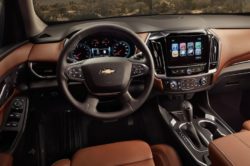 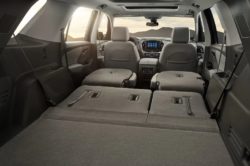 GM has decided to seriously up its game in mainstream SUV segment, where till recently, the offer was quite bland in every aspect, apart from full-size Tahoe. Compact echelon saw a big overhaul with the introduction of newest Equinox and latest Terrain, which are in every perceivable manner better than the stuff that precedes it. As far as mid-size stuff go, new Acadia has a word or two to brag about its progress too. Finally, the last piece of the puzzle arrived in form of 2018 Chevrolet Traverse.

LOOKING UP TO BIG DADDY

If you start saying something about outgoing Traverse’s appearance it would probably include words dull, blunt, generic, unimaginative… And we would completely agree. Fortunately, Chevy turned the page and new Traverse shares nothing visually with its ungainly past. Blunt turned to proud, dull to masculine, generic to imposing and more than a dash of imagination was used this time.

Let’s not get carried away, it’s not especially expressive, but it looks good in an American way. It resembles Tahoe with the stylistic approach and it invokes feelings of machoism when confronted. So, with this iteration, it joins a small group of manly looking mid-size SUVs, alongside Durango, Explorer, Atlas and Grand Cherokee. And fortunately, it also drives manly now, sure-footed and composed in majority of circumstances.

Interior also felt a huge surge in quality. A grade of used plastic skipped several levels upon arriving in 2018 Chevrolet Traverse and the design from blank evolved to pleasant. It even turns opulent in highest trims, although elevation of the price tag in those cases works as a giant spoiler, while fit and finish are in Chevy’s style, which isn’t praiseworthy.

The shape of the dash follows exterior styling philosophy and tries to appear butch, which is appropriate for one big SUV. And big it is! Despite GM shaved some inches from new Equinox, Terrain, and Acadia, already immense Traverse got even larger. That means that interior is simply vast.

The third row offers better figures only with VW’s Atlas, while the boot is the biggest thing in the class by far, despite it actually got smaller than before. As for infotainment, it can’t go better than MyLink. 7 or 8-inch screen, quickly reacting to inputs, logical, intuitive, with all possible connectivity, as well as with some unique features as Teen Driver.

Mandatory naturally aspirated V6 for this kind of SUV game means that old 3.6-liter carried over into the new model. It delivers now 310 hp or 22 hp more, but it has 260 lb-ft of torque which is strangely by 10 lb-ft less. With smooth 9-speed automatic sending power to front wheels, 0-60 mph takes 6.5 seconds which is a decent figure for the segment. Novelty is turbocharged 2.0-liter L4 which produces 260 hp and 295 lb-ft, and despite superior torque figure, hp one falls well behind V6, so Chevy’s decision to offer sporty RS trim only with four-cylinder seems kind of strange. Fuel efficiency figures saw pleasant evolution compared to past, now stopping at 17/25 mpg (city/highway for V6) when equipped with AWD, mostly thanks to the new shifter and lack of 351 pounds, but that still puts it mid-pack in its class.

IT WAS ALL FINE UNTIL WE CHECKED THE PRICE

Don’t be fooled by $30k starting price that sits a grand or two beneath many rivals. Let’s say you want leather upholstery than be prepared to cash out whole $42k for LT Leather trim. Top of the line High Country model? It intends to rob you for excruciating $53k. That all comes quite above schemes offered by the majority of rivals and that top price is only matched by Ford’s Explorer, along with the fact that it enters Tahoes’ territory. Still, at least now you’ll get more than a decent product for your hard earned cash.