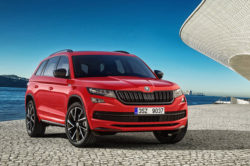 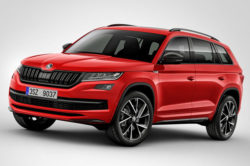 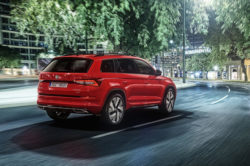 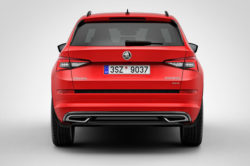 Despite making cheaper versions of VW’s cars, Skoda has been doing quite well lately. Their models are just as comfortable and well made as their more expensive siblings. On top of that Skoda is known for making highly reliable cars which do look different. The latter is one of the main selling points for the brand. The Kodiaq is the perfect example of that. The car is nothing more than just a VW Tiguan with a different interior and a revised exterior. While this is the case, the car managed to impress many people and its price, despite actually being slightly less expensive than the Tiguan, it does bring a lot more features as standard.

The car has been released last year and for this year Skoda will be releasing two new versions for it. One of these will be the upcoming 2018 Skoda Kodiaq Sportline which has already been previewed by Skoda a few weeks back. The car will be officially unveiled at the upcoming Geneva Auto Show when all the details are going to be shown.

This trim level is actually quite well known from VW which used it for some time now. On the Skoda though it usually comes with quite a bit more equipment. They also tend to offer a rather sportier exterior than their badge siblings. The price is still unknown but expect Sportline to cost in the upper range of the Kodiaq line. The car will likely hit the market in the third quarter of 2017.

One of the largest upgrades, at least from what Skoda showed us so far, is the car’s looks. The 2018 Skoda Kodiaq Sportline offers an amazing blend of features which make it seem a lot smaller than it really is. While things like the rear spoiler, the bumpers or even the roof rails are the same, the car definitely seems unique.

For starters the front and rear lower bumpers are all new. A dual-exhaust system is now offered while in the front a honeycomb mesh grille and small aerodynamic winglets have been added in place of a splitter. It seems that the Sportline will get both 19 and 20 inch alloy wheels wrapped in all season tires. The end result is rather impressive.

So far they haven’t said much about what we will find here. However, they did release the Superb Sportline not that long ago. That car comes with sportier seats, contrasting stitching, a new steering wheel and body-color inserts all around the cabin. It is safe to assume that the upcoming 2018 Skoda Kodiaq Sportline won’t be any different, especially when considering that the two will likely cost the same.

Even though it will be the most equipped version of the car, it will come with plenty of engines to choose from. There will be two petrol engines and a diesel offered in two different outputs. The performance will be very similar between the equivalent petrol and diesel offerings. The best part about them is that all wheel drive will come as standard across the range.

The base model will get the 1.4 liter turbo-four with 150 horsepower. The 2 liter turbo-four with 180 horsepower is going to be an option. Roughly at the same price point there is also going to be a 2 liter diesel with 150 horsepower. The most expensive offering will be the 2 liter diesel with its 190 horsepower. It still is unclear at this point but it seems that an automatic gearbox might be the only option. As standard the car will also get adaptive dampers which should make the ride either smooth or harsh, depending on what the driver wants.