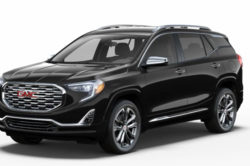 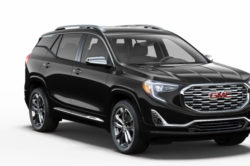 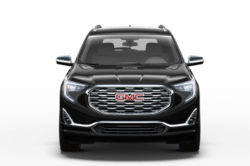 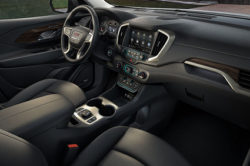 After plenty of rumors about a new Terrain, GMC finally released it back in January. Even though some of the rumors remain just rumors, the car released is actually a lot more impressive than what people thought. The new 2018 GMC Terrain sports the same D2XX platform as new Equinox and it features roughly the same running gear as the Chevrolet. However, for this generation GMC tried to depart themselves from their siblings. The new Terrain is said to be a more premium offering than before which would make sense for the entire GM company. With it they could be able to compete with the likes of the Tiguan or the CX-5 without having to worry about lacking features or quality materials.

While the car is being sold in the same market segment as before, it is now smaller. This is a rather odd move, especially since most manufacturers push for bigger and better every year. The new Terrain is 3.2 inches shorter, 0.4 inches narrower and it is 0.9 inches lower than before. The wheelbase is also 5.2 inches shorter.

Despite that though the new Terrain should offer slightly more leg and headroom than before, both in the front and at the back. The car remains a five seats model only, so it won’t be able to compete with the future CR-V or the Tiguan, both sporting up to seven seats. The best part about the smaller footprint is the car’s weight. The new 2018 GMC Terrain is now with nearly 500 pounds lighter than before. This should aid fuel economy, comfort and performance. The price is still unknown but we expect it to be priced quite aggressively.

One of the largest changes for the GMC Terrain has to be the way it looks. The car went from a boxy and rather muscular design to something which is considerably more stylish. In the front there is a brand new hexagonal grille, which is expected to be seen on most GMC models, new headlights with C-shaped daytime running lights and a small intake in the bumper.

The curvy design continues on the profile and towards the back. The C-pillars of the car have been blacked out and integrated into the window-line. The end result is a coupe-like look only seen on a handful of other crossovers. The rear continues with the C-shaped tail lights, a low loading floor and a rather sporty look with a smaller than average rear window.

While the exterior is all new, the interior is not. The 2018 GMC Terrain shares most of its interior features and design with the other newly released GM products. This is not exactly a bad thing.

The dashboard is nicely laid out, there aren’t that many buttons and the materials are great for this class. The driving position is still quite high but the visibility decreases, especially with the previously mentioned small rear window and thick C-pillars.