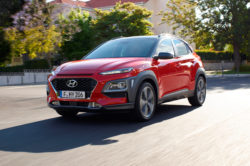 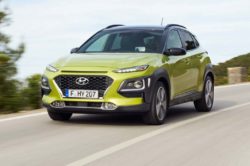 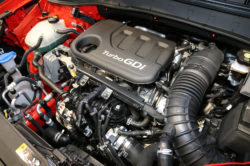 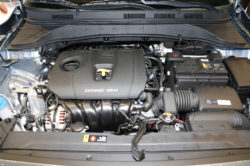 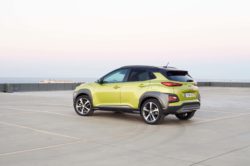 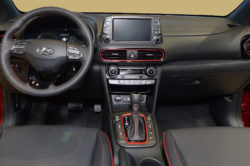 After quite a few leaked photos of the 2018 Hyundai Kona and not that many official details the car was finally released a couple of days back. It seems that most rumors were correct and on top of that the car is much more impressive than first thought. Unlike what most said, the car has been designed in the United States. On top of that it seems it won’t be based on the same platform as the smaller i20 hatchback.

The new Kona is Hyundai’s first car based on their new modular architecture which will eventually find its way under most of their other small cars. This gives it a big advantage over most of its rivals as the new platform also allows for an all wheel drive system but more on that later. In terms of size the new Kona is actually not much bigger than an i20. However, it is considerably wider and taller, so it actually provides the same amount of space inside as one of Hyundai’s larger cars.

Also, the car’s suspension will be quite interesting. While the base models will get a torsion beam in the back, the higher powered diesel and the all wheel drive models are set to receive an independent suspension setup which will make them more comfortable and better to drive. The car’s price hasn’t been revealed for now but it will go on sale in November across Europe.

There are quite a few engines on offer with the 2018 Hyundai Kona. So far the Korean company confirmed four different powertrains. The base models are going to receive a 1.0 liter turbo-three good for 118 horsepower and 175Nm of torque. This is slightly better than some of its rivals and the fuel economy will be better too.

A 1.6 liter diesel will also be available with either 113 or 131 horsepower. All three versions will be available as standard with front wheel drive and a 6 speed manual gearbox. At this point Hyundai didn’t confirm an automatic or even an all wheel drive system for these particular engines. The range topping model is set to receive a 1.6 liter turbo-four gas engine good for 175 horsepower and well over 200Nm of torque.

Unlike the others this will only be mated to a 7 speed dual-clutch automatic with either front or all wheel drive. This will make the Kona the only all-wheel drive car in its class which should give them a huge lead over their main rivals. In the future a full electric model is also a real possibility, especially now when Hyundai has the powertrain already out on the Ioniq.

Likely one of the most impressive things about the 2018 Hyundai Kona is the way it looks. The car doesn’t share much with the rest of the cars in Hyundai’s lineup and that’s fine. In the front it gets a large hexagonal grille on top of which there is a small air intake.

The top slim headlights are actually the DRLs while the lower headlights are the usual low and high beams. Hyundai also mounted the fog-lamps quite close to the center of the car so it looks considerably more aggressive than otherwise. The entire lower part of the car has been covered in black impact plastic. Its rear is just as quirky as the rest of it with a really interesting C-pillar design, a roof spoiler and separated tail lights similar to its headlights.

The cabin of the Kona is a bit more conventional than its exterior. For starters, it somewhat looks like the i30 hatchback. However, due to the fact the cabin is taller, the HVAC vents and the center console are all new.

On top of that the car boasts quite a bit more gear with things like a larger infotainment screen and one of the largest head-up displays on the market.