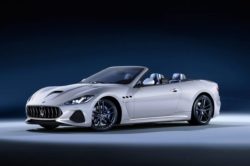 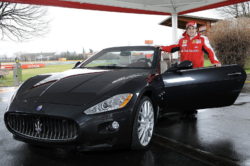 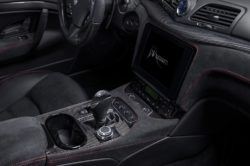 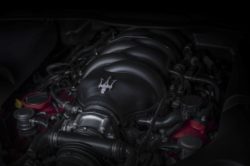 The current GranCabrio has been released back in 2009 but the car is actually based on the coupe which has been around since 2007. In this time the two cars didn’t change much but Maserati did update their interiors with new technologies. Not that long ago the 2018 Maserati GranCabrio has been revealed and it looks like a mild improvement over its predecessor. They also announced that this will be the last update for the car meaning that this new model is also going to be the best in the range. The revised car received a small change in design as well as a new interior. However, most of its running gear as well as the engine are roughly the same as before. This means the GranCabrio is still not a sports car but a grand tourer meant for high speed driving over long distances.

The car has been revealed at this year’s Goodwood Festival of Speed and it seems it will go on sale in the near future. Its price is still unknown but it looks not much will change with the base models. However, Maserati did say a special edition model will be revealed at a later date.

It is safe to assume that this will cost considerably more than the current GranCabrio and it will be made in limited numbers too. The upgrades on this version are still unknown but we do not expect anything too drastic over what is currently available.

Possibly one of the biggest selling points of the new 2018 Maserati GranCabrio is its design. Even though the changes have been kept to a minimum, it still looks on par, or better, with any other current grand tourer on the market. In the front the car has clear design cues from the Alfieri concept which has been released back in 2016. It shares the same type of grille with the vertical chrome slats while the revised lower air intakes give it a much meaner look than before.

There is also a new lower splitter which is now better integrated into the bumper in order to not only look more styling but also improve aerodynamic drag. In fact the car now boasts a 0.33 aerodynamic drag coefficient instead of 0.35 like its predecessor. This improvement alone should reduce wind noise inside the cabin and give the new GranCabrio a higher top speed as well. In the rear of the new GranCabrio there are no real changes while the wheels, available colors or even the soft-top are still the same as before which is slightly disappointing.

Just like with the exterior, the 2018 Maserati GranCabrio received quite a bit of attention on the interior. Here the car received a brand new 8.4 inch infotainment system which is not a touch-based system with much better hardware and software than before. In order to make room for this new unit the usual shortcut buttons on the side as well as those found under the infotainment system are gone.

These have been either moved near the gear shifter or discontinued altogether. The climate controls have also been moved lower and further into the dashboard. The end result is a much cleaner looking setup than before which should also be easier to use.

The 2018 Maserati GranCabrio is still powered by an all aluminum 4.7 liter naturally aspirated V8. This is a Ferrari-developed and built unit which is capable of providing up to 453 horsepower and 384 lb-ft of torque. Even though this may not seem that impressive, it is perfectly adequate for this particular model which is not meant for track use.

The engine sends all of its power to the rear wheels via a 6 speed automatic which is one of the faster torque-converter units on the market. This will get the car from 0 to 60 MPH in around 5.0 seconds and it will help it achieve a top speed of around 180 MPH. The only real drawback of this engine is the low torque at low RPM. This makes it unsuitable for every day use which is a shame as it is otherwise a really good engine. The fuel consumption is also quite bad with an average of less than 15 MPG.