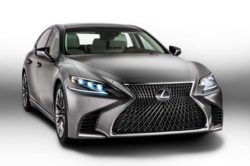 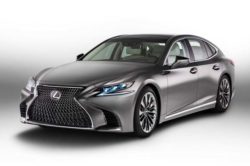 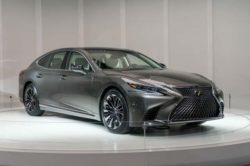 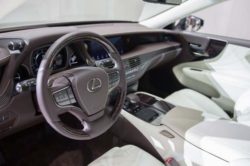 After years of being behind their competitors, it seems that Lexus might be finally able to get in the front. Their newest addition is the brand new LS which has been showcased back in January at the North American International Auto Show. Unlike the previous models, the new one doesn’t share anything with its predecessors. In fact the new 2018 Lexus LS 500 is based on Lexus’ brand new GA-L platform which also underpins the LC super-car. This means that it should not only drive better than before but also be more comfortable and quiet. The new platform is significantly stiffer than the one before it so the NVH levels will be improved quite a bit.

The newly released LS 500 features a 1.3 inches longer wheelbase than before, it is more than half an inch lower and its hood and trunk are considerably lower than before. The end result looks a lot like a four-door super-coupe which is very impressive.

The new platform also allowed Lexus to install a brand new running gear and with it, a new engine and transmission. They haven’t specified when the car is going to hit the market. However, considering the release of the LC, it is safe to assume the LS 500 will only be released closer to the end of the year. Its price should be similar to that of its rivals which ranges between $70,000 and north of $200,000.

Even though the four-door coupe has been done before, it doesn’t change the fact the 2018 Lexus LS 500 looks spectacular. The front end still features their spindle grille which received mixed critiques. However, leaving that aside, the overall design is perfectly proportioned.

The hood is long and low, the cabin features an arched roof and the rear end is quite short. The car’s width makes for a very impressive rear end with an unnecessarily aggressive front end. Lexus only showcased a silver model of the car wearing a single set of wheels. The production model will more than likely come with a lot more choices than just that.

The changes are for the better here as well. Lexus departed from the button-crazed interiors that were using quality materials but average designs. The new 2018 Lexus LS 500 is at least as impressive as its rivals. The car features a fully digital instrument cluster which works in cooperation with the widescreen on the center stack.

The HVAC vents are nicely laid out and the buttons can be easily reached by the driver. Even though it is a rather simple interior, materials like aluminum, leather or real wood elevate the experience. Lexus also noted that the LS will come with a 24 inch head-up display as an option. This would be the largest we have ever seen on a car but it remains to be seen if it will actually come to fruition.

Despite its name, the LS 500 features a 3.5 liter V6 which has been twin-turbocharged. This is the same engine expected in the new Supra. In this application it makes 415 horsepower and 440 lb-ft of torque which is actually quite close to their 5 liter V8. Even though it makes plenty of power, the engine is said to be quite efficient.

It will drive the rear wheels via a 10 speed automatic gearbox. So far there aren’t more details available. We are quite sure that an optional all wheel drive system will be available at a later date. On top of that, the hybrid system from the LC could easily be installed on the LS, especially since the two cars share the same platform.

The Elantra has been around for a while but recently Hyundai released a new version for the US market. This …