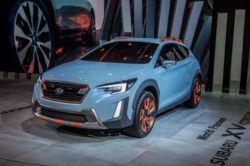 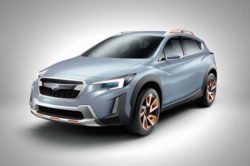 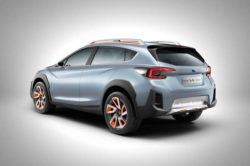 A few days ago Subaru just released the new XV and so far it seems as good as everyone said it is going to be. Instead of using the older platform, the 2018 Subaru XV is actually based on Subaru’s brand new modular architecture. This also underpins the new Impreza and it is not only more rigid than before, but it also sports a lower center of gravity. With it, the new XV should have better NVH levels and it should also be safer in case of a crash. The size of the car didn’t change much over the older model but this has been expected for a while.

On top of the new platform, the XV comes with a tweaked engine, a revised running gear, a new interior and plenty of other new features. Despite all of that, it is still going to cost roughly the same as before. The car will hit the US market as the Crosstrek and it will continue to cost right under $23,000 for a base model.

The 2018 Subaru XV builds up on the success of the original model. This means that the model underneath all that plastic cladding is still a basic Impreza hatchback. In order to become the new XV, Subaru added to the Impreza body a lot of black impact plastic cladding all around the car. There are larger over-fenders than before, new front and rear bumpers and even a new black grille which follows the shape of that on the Impreza but with a new insert.

Both the fog-lamps and the headlights feature black backgrounds for a meaner look while the rear end receives a bulkier bumper sporting a small shield under it for protection. All versions of the XV will hit the market with 18 inch wheels but some time after its launch we may see smaller wheels added to the car.

While the older model was quite dull and the materials inside were average at best, things changed for the better in the new car. It actually gets the same dashboard as the Impreza but this is far better than before. Not only are the controls better laid out but also the materials are far superior.

Also, Subaru is adding considerably more standard and optional features into the mix. Their EyeSight drive assistance system will be standard in Europe while the 8 inch touch-screen is expected to remain standard for the US model as well. On top of the orange contrasting stitching inside, the only other difference over the Impreza is the addition of an electronic parking brake and a wider armrest.

There are no surprises here. While we would have loved to see a turbocharged mill powering the 2018 Subaru XV, they went instead for a revised FB engine. The 2 liter naturally aspirated flat-four unit can provide up to 154 horsepower and 145 lb-ft of torque, a mild improvement over its predecessor. Unlike the US model, the European version is also expected to get a 6 speed manual together with an optional CVT. Subaru’s all wheel drive on the other hand will remain the standard offering as well.

For the AWD system they added a new X-Mode for better handling and performance in light off-road. This will act as having mechanical locking differentials, so it should allow the XV to send torque to the tire with most grip. A similar system has been used before by some of its rivals but none of them really managed to make it work all that great. Subaru also added a faster steering rack as well as revised shocks, all of which should make the XV drive considerably better than the one before it.