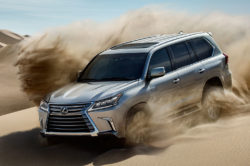 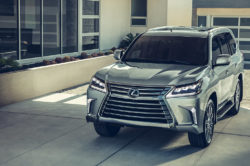 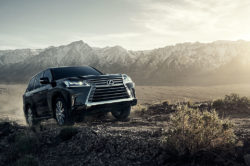 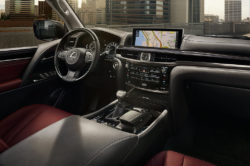 Released in 2007, the ongoing LX is not exactly the most up to date vehicle on the market. Even though the manufacturer tried to stay ahead of the pack with continuous updates, the car still feels relatively old. This is also the case with the newest update, the 2018 Lexus LX 570, which the manufacturer released a short while ago. In fact the changes for this update have been kept to a minimum which is likely due to the fact Toyota is already readying a successor for the car. This update includes a few upgrades on the exterior and that’s about it. At its core, the car remains the same SUV Toyota released more than a decade ago and it shows.

The LX 570 shares the body on frame design with the large Land Cruiser. This means its structural rigidity isn’t exactly on par with some of the newer models available on the market. Also, the steel body and the overall heavy duty components make the LX weigh considerably more than any of its direct competitors.

This translates in poor performance and fuel economy as well as less than ideal driving characteristics. One of the greatest things the car remains good for has to be its towing capabilities. Unlike many other crossovers currently on sale, the LX will easily tow its weight and a bit more which is something quite impressive, especially since it is a luxury product.

Not that long ago the manufacturer released the 2018 Lexus LX 570 which is set to go on sale in the near future. As we have said, they kept the changes to a bare minimum, or just enough to keep it relevant. The price for the update didn’t change much, so it will still cost over $90,000 which is a lot of money considering what it has to offer. Even so, this didn’t stop Lexus to offer a new package for it which will add quite a bit more over that.

One of the reasons people still buy the 2018 Lexus LX 570 has to be the way it looks. Even though the car doesn’t really look modern, it looks muscular and quite aggressive which are two traits people are looking into when buying a car. The front end features Lexus’ well known spindle grille design with the angled headlights and the large bumper intakes.

The car also features 20 inch rims as standard while the clean rear end completes the design nicely. A short while ago they also released a TRD package for the LX. This includes a unique body kit, including a new grille, 21 inch rims wrapped in performance summer tires as well as unique black accents such as the mirrors or the window frames.

This hasn’t changed much since the car first hit the market. Even so, thanks to the continuous upgrades, the new 2018 Lexus LX 570 is actually a really nice place to be in. For starters, there is a new wide-screen infotainment system which is of a much higher resolution than before.

The materials are also great while the driving position actually improved slightly. There are still far too many buttons on the center stack but this is understandable for a car released a decade ago. Both the front and middle seats get enough room for anyone but the rearmost seats aren’t exactly the most comfortable on the market.

Here we can find a 5.7 liter naturally aspirated V8 which has its roots in the Tundra pickup truck. This engine can offer a rather impressive 383 horsepower and 403 lb-ft of torque, more than enough to move the massive LX with haste. With it the car will hit 60 MPH in just 7.2 seconds and it will do the quarter mile in little over 15.0 seconds. An 8 speed automatic drives all four wheels via a set of electronically controlled differentials. Even though the car is not the fastest out there, it is definitely fast enough. The big drawback here has to be the fuel consumption. The LX 570 will barely hit 15 MPG on average which is far worse than pretty much any of its direct competitors. We do hope for a replacement but for now it looks like this is not going to happen anytime soon.

After most of us assumed the new Legacy was going to be redesigned, Subaru decided to wait a couple more …