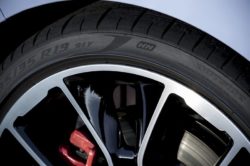 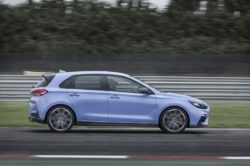 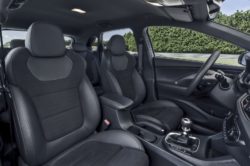 Released last year, the 3rd generation of the i30 managed to impress so far. However, it looks like Hyundai wants to become more than just an alternative to its European rivals. Not that long ago they revealed the brand new 2018 Hyundai i30 N. Even though the name might not suggest much for now, “N” is Hyundai’s new high performance division which basically stands for “developed on Nurburgring”. The new i30 is the first car to bear this badge but it looks like more models are going to be released soon enough.

While the base model of the i30 benefits from a torsion-beam rear axle, the new i30 N comes with a fully independent suspension setup. The car comes with all new shocks and lower springs as well as with thicker anti-roll bars and redesigned bushings. The end result is a stiffer ride but also a much more controllable chassis.

The car also received much larger brakes than the normal model. It still comes with floating calipers in the back but the front brakes use fixed calipers which should give the driver a better pedal feel. With this model Hyundai also released a First Edition model but this was actually sold out in a couple of days. This is mostly because they limited the run to just 100 units and they only offered the car for the German market.

The design of Hyundai i30 N

The 2018 Hyundai i30 N is based on the regular i30 hatchback. However, there are quite a few differences between the two cars. For starters, as standard the i30 N comes with Xenon headlights and LED DRLs. There is a brand new honeycomb grille sporting the “N” badge as well as a new bumper. This includes larger intakes than the base model as well as a subtle splitter. Hyundai also installed blacked out side-skirts, mirrors and window inserts.

In the rear there is a more aggressive bumper with an included diffuser. This also sports a set of dual exhausts. While the car is definitely more impressive than the base model, it is not nearly as aggressive as its rivals but we would say that’s actually a good thing for Hyundai. As standard the i30 N comes with 18 inch rims but a set of larger 19 inch rims is also available as an option.

Unfortunately not much changed over the regular i30. The N version of the car gets the same dashboard and roughly the same set of features. There is a sportier instrument cluster and a slightly different steering wheel with blue buttons on it.

Hyundai also added blue stitching throughout the cabin but this is quite subtle. The biggest difference over the base model has to be the new set of sports seats with larger bolsters that should give the passengers a far better ride.

The 2018 Hyundai i30 N comes with a 2.0 liter turbocharged inline-four engine. For the base version this provides a rather impressive 246 horsepower and 260 lb-ft of torque which is actually more than its rivals. A “Performance Package”, offered as standard on the First Edition model, is available as well. This bumps the output to 271 horsepower but keeps the torque rating unchanged. Both of these can be mated to a 6 speed manual gearbox which has been specifically tweaked for this particular model. Front wheel drive is the only option but it looks like this may be true only for now. It seems that in the near future Hyundai will also release an automatic, likely a dual-clutch gearbox, which is set to drive all four wheels. It still is unclear the output for this upcoming model but we wouldn’t expect any major changes over the current model.