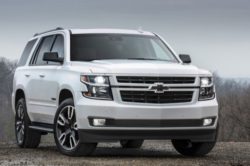 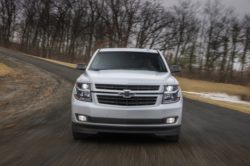 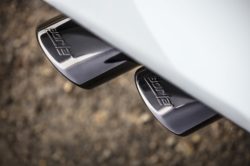 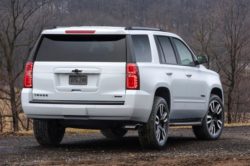 With a few exceptions, there aren’t all that many US manufacturers making performance SUVs. This is mostly because so far younger people were not interested in these type of cars. However, this changed not that long ago so an all new market has been opened for them. One of the first manufacturers to take advantage of this opening has been GM. A few days ago they showcased the 2018 Chevrolet Tahoe RST. The RST stands for Rally Sport Truck and it is meant to be the new sporty trim level aimed at younger buyers that use their SUVs mostly in the city or the open road and not so much in off-road.

The Tahoe RST not only gets a cool name and a brand new set of paint schemes. The RST packages is much more than that which is quite refreshing to see. For starters, it gets a revised exterior look, a new engine as well as a new transmission.

The RST also comes with a new running gear which are all meant to work together in order to make the driving experience as great as possible. The price hasn’t been revealed but we would guess the RST will cost in the neighborhood of a Denali-spec SUV.

The engine on the 2018 Chevrolet Tahoe RST is a 6.2 liter naturally aspirated V8. This is the same GM has been using on their top end cars for a while. Here it makes 420 horsepower and 460 lb-ft of torque which are routed to the rear wheels via a 10 speed automatic. So far Chevrolet hasn’t said much about a possible all wheel drive system but this would make it that much more desirable, so it may receive it at a later date. With the new engine and transmission, the RST will hit 60 MPH from a standing start in just 5.7 seconds. The 5.3 liter V8 is still going to be available as the base unit though.

An optional Performance Package will add quite a few running gear upgrades. These will include a Magnetic Ride Control suspension as well as a tweaked computer which should keep the RST level during hard cornering. Another package will improve the front brakes. However, this is rather impressive and it hasn’t been offered on any other car so far. Instead of the tiny rotors, the RST will get 410mm rotors, six-piston Brembo aluminum fixed calipers as well as larger brake pads. The end result is a more than 40% increase in rotor area and 80% increase in brake pad area which is very impressive. With this package they will also add a Borla exhaust system which is said to slightly increase the power and give the RST a meaner sound.

Unfortunately the cabin of the 2018 Chevrolet Tahoe RST doesn’t get many upgrades over the usual model, at least from what GM told us so far. However, it may receive contrasting stitching and likely a better set of features. The exterior on the other hand is a bit more impressive. The RST will only be available in 4 colors and all the chrome usually found on the Tahoe is now gone.

In its place they added tasteful body-matched paint of gloss black. The grille and door handles are now color-coded to the rest of the car. The badge, window surrounds , mirrors and roof rails on the other hand have been covered in gloss black. The unique 22 inch wheels boast black accents as well so the end result is rather striking. These have been wrapped in high performance 285 section tires, so the Tahoe RST should actually be quite good to drive which is not that common with SUVs as big as it.