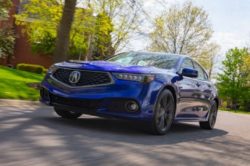 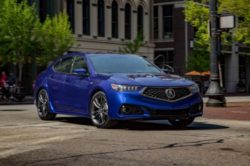 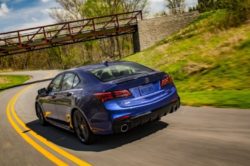 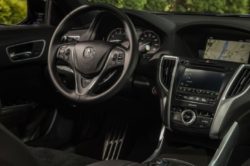 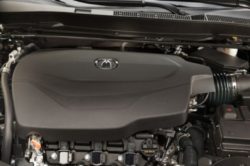 Even though it has been around only since 2014, the TLX received a major facelift a few months ago. The newly released 2018 Acura TLX boasts more than just a new styling. The car gets new features and it brings a few chassis tweaks meant to make it slightly more fun to drive. Unfortunately the interior has been left relatively unchanged which is a shame considering the car is still missing a few important commodities that are otherwise available on its rivals. Even so, the 2018 update is more than welcomed considering how much it brings on the market for roughly the same price as before.

All models of the TLX now comes as standard with   a frontal collision warning and an automated emergency braking feature. The latter is more useful in the city but it still has its use on the highway. On top of that there is an adaptive cruise control as well as a lane-keep assist system.

All of these allow the TLX to be easier to drive on the highway but still maintain its fun character. Specifically for congested traffic Acura released a brand new system with this update. There is a low-speed-follow system which will steer the 2018 Acura TLX according to the car in front. With the adaptive cruise control system it basically means the car will drive itself up to certain speeds which is quite impressive, especially for this class.

Likely one of the biggest changes on the new model is the way it looks. This time around the TLX lost its chrome grille for something a bit more impressive. The car features Acura’s new corporate grille which boasts a honeycomb mesh instead of the usual chrome. The TLS also gets their new Jewel-LED headlights, new front fenders which are slightly wider as well as a new bumper.

For a limited time it seems Acura is going to offer an A-spec version of the car. This will also include a sportier rear bumper, a more aggressive front end with blacked out accents as well as large grayed-out wheels in order to go along with the blackened inserts across the body. In the back the V6 also gets a different bumper which sports a subtle diffuser and carbon-fiber accents.

Besides all the new safety tech, the TLX is mostly identical to its predecessor. This means it still is a very comfortable car but it lacks a few essential features. One of the most important is the infotainment system.

Even though the car has an infotainment system, this is Honda’s older two-screen unit which is by far one of the worst ever installed into a car. This is not easy to use and its hardware can’t really keep up with people’s need for speed. Unfortunately it seems that this won’t change anytime soon, especially when it is integrated into the dashboard.

Nothing changed here, at least in terms of engines. There are still 2 engines available. The base model sports a 2.4 liter naturally aspirated mill good for 206 horsepower which is quite impressive. As an option Acura will also offer a 3.5 liter naturally aspirated V6 offering a more impressive 290 horsepower. Both of them will power the front wheels as standard but only the V6 will come with all wheel drive as an option.

The limited edition A-Spec comes with a few interesting perks. This gets a stiffer suspension from the factory as well as a different anti-roll bar in the back. The end result should be a car that will take corners at higher speeds than before while not feeling out of control. The 8 speed DCT gearbox will remain standard on the inline 4 engine while the V6 will still come equipped with the 9 speed ZF automatic. Unfortunately Honda’s 10 speed gearbox won’t be used on this generation anytime soon.