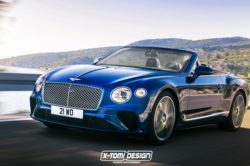 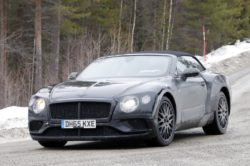 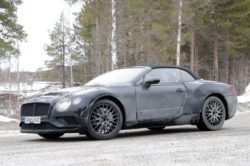 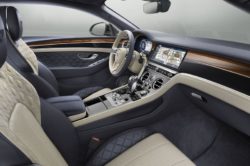 Bentley released the all new Continental a short while ago and so far the car sold quite well. However, it looks like they are going to release at least a couple of new models in the near future. One of these is going to be the future 2018 Bentley Continental GTC, the convertible version of the GT. Unfortunately the manufacturer didn’t say all that much about it just yet. Even so, it is quite easy to assume what the GTC will boast in terms of features and performance. The big difference over the coupe is going to be the weight and the removable top.

Just like with the coupe, the GTC is going to use VAG Group’s all new MSB modular architecture which also underpins the Panamera. This is a longer wheelbase than before with the front wheels being moved further in front of the cabin. This allowed Bentley to lower the weight over the front wheels by 3% which should give the car slightly better driving characteristics.

The car is also going to be wider than before as well as lower which will definitely aid with its design. With the new platform Bentley will also manage to improve the NVH levels even further. Also, thanks to its increased structural rigidity, the new GTC should be able to do with less reinforcements in its floor which will lower the overall weight of the car.

The new GT starts at a shy over $200,000 which makes it one of the most expensive cars in its class. Well, the 2018 Bentley Continental GTC is going to get even more expensive. Most rumors seem to suggest around $15,000 more than the coupe which would be in line with some of its rivals. Unfortunately the release date is still unknown but even so, the car should be out by the start of the summer of 2018.

While the manufacturer didn’t release any official pictures, it is not that hard to imagine how the 2018 Bentley Continental GTC is going to look. For starters, the car will feature exactly the same front end as the coupe. This will still be reminiscent of its predecessor with the same type of grille and headlights.

However, as the size of these changed, and the headlights now follow the curvature of the fender, the car will feature a far more aggressive design than before. The rear will also be quite impressive. Why? Well, unlike that of its predecessor, the rear end of the new GT is far lower. This means the convertible will receive the same treatment which should mean a far more stylish design. As before, the car will likely use a soft-top but this has yet to be confirmed.

The coupe features a 2+2 configuration with a slightly smaller set of rear seats. While we would love to see the 2018 Bentley Continental GTC rocking the same layout, this is quite unlikely. Even though the car features a longer wheelbase, there is a longer hood and not exactly a larger cabin. This could mean the rear seats will be deleted in order to make room for the roof mechanism.

In terms of design, the car will feature the same dashboard with the massive wide-screen infotainment system and the new air-vents design. It will also come equipped with the digital instrument cluster and the massive amounts of leather and aluminum which definitely elevate the way the car looks.

The 2018 GTC will likely feature two different engines which will eventually find their way onto the GT. The base model should get a 4.0 liter twin-turbocharged V8 which should easily provide over 500 horsepower and 500 lb-ft of torque. The higher end version of the car will get the same 6.0 liter W12 twin-turbocharged engine that can be currently found on the GT. This is known to make well over 600 horsepower and 600 lb-ft of torque, thus making it one of the most powerful convertibles on sale. Both engines will send their power to all four wheels via an 8 speed automatic. This won’t be the usual ZF torque-converter unit. Instead, it will be the same dual-clutch gearbox as that found in the new Panamera which is quite a bit more impressive.

4.8 In order to better differentiate their models, back in 2013 BMW decided to rename the coupe and convertible versions …