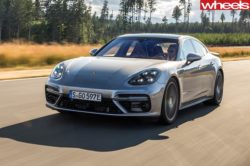 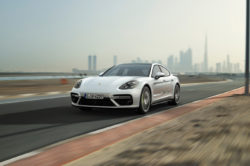 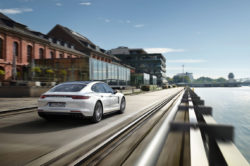 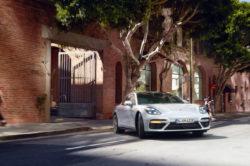 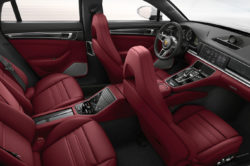 The new Panamera has been released not that long ago and it is a vast improvement over its predecessor. With this new model Porsche also decided to release not one but two all new hybrid versions for the car. One of them is the 2018 Porsche Panamera Turbo S E-Hybrid, a high performance hybrid model which is the fastest car of its kind currently on the market. The car has been first revealed a couple of months back but only recently Porsche released it. The base price for the E-Hybrid is little over $184,000 thus making it the most expensive model in the range. A better equipped version of the same model will set you back north of $200,000 which is quite a bit more than most other cars of its kind.

The new Panamera is based on Porsche’s MSB modular architecture which has been specifically developed for high performance applications. This uses aluminum for its frame with some carbon fiber inserts. The end result is not only a really rigid chassis but also quite a bit lighter than the one before it. This has is required mostly because the hybrid weighs quite a bit more than all of the other Panamera versions.

Because of that the car may feel a bit less sporty than usual but even so it outruns its competition with ease. Because of its weight this version of the Panamera is one of the few to feature an upgraded braking system. The car comes as standard with carbon-ceramic rotors as well as bright-green 6-piston calipers provided by Brembo. On top of that the car can use its electric system to regenerate braking force so it should be quite a bit better than some expect.

One of the most impressive parts of the 2018 Porsche Panamera Turbo S E-Hybrid has to be its engine. The car uses the same 4.0 liter twin-turbocharged gasoline V8 as the regular Turbo S version of the car. This means that it is no slouch. However, on top of that it adds a 100 pounds electric motors, which is capable to provide 136 horsepower all by itself, as well as a 250 pounds battery which not only stores braking energy but it also gives the car a usable all-electric range. The total output for this system is a rather impressive 680 horsepower and 626 lb-ft of torque which makes it the most powerful four-door sedan in the world.

Just like all the other versions of the car, the E-Hybrid comes with all wheel drive as standard. The transmission is the same great 8 speed dual-clutch automatic that can be found in the regular Turbo S as well but it seems Porsche redid the software in order to better fit this application. The car will actually accelerate to 60 MPH from a standing start in just 3.2 seconds and it will hit 192 MPH which is on par with the rest of the cars in its class. In order to handle all that weight, and power, the car also gets an adaptive suspension system alongside those carbon ceramic brakes.

There is no question about the fact the 2018 Porsche Panamera Turbo S E-Hybrid looks pretty much like a slightly longer 911. This is not a bad thing at all. Even though the car is larger than its predecessor, somehow Porsche managed to get the proportions all right so it finally looks like a four-door super-car.

The Panamera has a long hood and a sloping roof-line which really sets it apart from its rivals. Over the other versions, the E-Hybrid also comes with a few unique quirks. It gets massive 21 inch alloy rims wrapped in high performance tires, needed in order to clear those brakes, as well as Acid Green calipers. On top of that the 2018 Porsche Panamera Turbo S E-Hybrid looks pretty much on par with the other versions of the car.

While the design hasn’t changed, thanks to the fact the E-Hybrid is the range-topping version it does come with quite a few upgrades over the regular models.

Things like removable rear tablets, Wi-Fi hot-spot, a massive widescreen infotainment system or individual front and rear seats are standard for this model. On top of that the car comes with quilted saddle-leather which really makes the interior special.