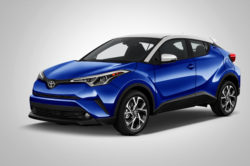 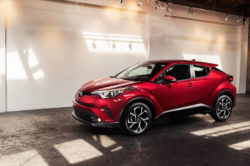 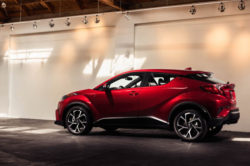 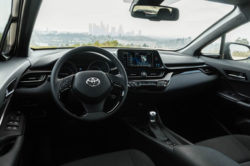 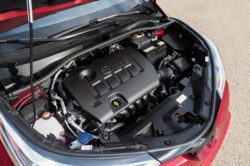 Back in December Toyota showcased the brand new C-HR in Japan. The car was later revealed in the US in January and so far it has been a success. This tiny subcompact crossover will be aimed directly at the Kia Soul, Mazda CX-3 or the Jeep Renegade. Even though it looks like nothing else on the market, it seems that it will be a success, at least based on the initial response. The car is actually a four-door crossover meant to replace the Scion xD. Unlike its predecessor though, it offers a more modern design and plenty of features for this class.

Like Toyota’s other new cars, the C-HR is based on their TNGA modular architecture. This is considerably stiffer and also lighter than their previous front wheel drive design. With it, the C-HR should not only look sporty but also drive like a sports crossover. Its price hasn’t been announced for now but it is expected to arrive in the upper limit of its class.

This means a starting point of around $20,000 and not $17,000 like the Kia Soul. Even though it will likely lose some customers, the higher price is needed in order to offer a great experience. The release date is still unknown but we would expect it on the US market by the end of the year.

The 2018 Toyota C-HR looks pretty much identical to the preceding concept car. The only real changes are the doors and wheels. Unlike the concept, the production version of the car features four doors. The front doors are quite obvious but the rear doors feature smaller windows and a hidden handle. The end result is a car that looks a lot like a two-door crossover coupe.

In the front we can see some influences from the RAV4 but in the back it looks nothing like it. Instead it seems to share some design traits with the Civic Coupe which is quite impressive. The roof mounted spoiler, the angular headlights or the trunk mounted spoiler all make for a really aggressive design. The car also features large black plastic inserts in the front and rear bumpers and on the sides which are meant to keep it protected from rocks and debris.

There are plenty of features even on the base model of the 2018 Toyota C-HR. Things like frontal collision warning with pedestrian detection, automatic emergency braking, lane departure warning with automatic steering input or even an adaptive cruise control are all standard.

These are features that some of its more expensive siblings don’t even get as standard, so it seems that Toyota wants their tiny crossover to be something really special. The design here is less impressive than on the outside. Despite that the front seats offer plenty of bolstering, the controls are nicely laid out and the materials are at least on par with those of its rivals.

The US model of the C-HR is going to hit the market with a 2 liter naturally aspirated inline 4 gas engine. This will provide 144 horsepower and 140 lb-ft of torque which is average at best. Like with most of its rivals, front wheel drive will be standard. However, an all wheel drive system won’t be available, at least at launch.

The only gearbox of choice is going to be the CVT unit which will simulate seven gears. This will offer a manual mode but it is far from ideal. Considering the target audience of the car and how great it looks, a manual is not out of the question for now. Also, in the long run we may see a turbocharged engine to be installed under the hood of the C-HR.

The all-new 2018 Land Rover Defender will represent the next generation of free-range utility vehicles. It will include a whole …