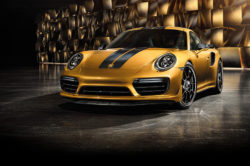 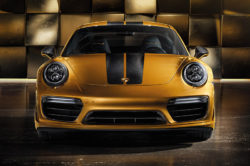 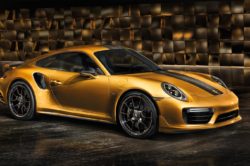 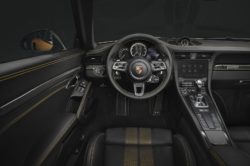 A few days ago Porsche revealed a brand new addition to the 911 range with a limited edition Turbo S model. The 2018 Porsche 911 Turbo S – Exclusive Series which marks the millionth 911 produced to date. This is a really impressive number for one of the best sports cars ever made. The Exclusive Series isn’t just the most powerful Turbo S to date but it also brings a few unique features. These are going to be limited to the 500 units Porsche is going to build so they will likely be sold in no time at all.

Just as its name suggests, this limited edition model is based on the regular Turbo S. However, Porsche upgraded the car’s exterior and interior as well as gave it more power. You would expect the increase in price would be minimal.

However, the Exclusive Series will cost $257,500 which is $66,000 more than what the regular Turbo S costs. On top of that Porsche will allow its customers to get a few extra features which will add an extra of at least $6,000. This also makes it one of the most expensive 911s to date.

At a first glance the 2018 Porsche 911 Turbo S – Exclusive Series looks mostly identical to the regular model. However, it is quite clear that the paint scheme is all new. This edition has been covered in a really subtle gold which is accented by a set of darken gold striped that run across from front to back. The end result is quite stunning. On top of that Porsche installed unique center-locking 5 spoke-wheels that are painted in a gloss-black accented by the same gold color that we can see on the car.

The carbon fiber accents haven’t been left unchanged. In order to better contrast with the car’s gold color, Porsche decided to use copper inside the carbon fiber weave. The end result is a regular-looking carbon fiber that will stand out when illuminated. This is actually a first in the industry so we hope we will see the same process again at least on future Porsche cars.

Things haven’t been left untouched on the interior either. While most of the design is the same as on the Turbo S, all the details make it pop when compared to the original. For starters, the car features contrasting metallic-yellow gold stitching throughout the cabin.

The seats feature the same type of gold stripes as on the exterior which can also be seen on the car’s rev-meter. The usual aluminum inserts have been replaced with carbon fiber. This has actual copper threads woven into it so it pops out even more than it would otherwise. The copper-gold color has also been used on the headliner which together with the black leather allow the car to feel quite special.

The 2018 Porsche 911 Turbo S – Exclusive Series features a 3.8 liter twin-turbocharged flat-six engine, the same that can be found in the Turbo S. In this particular application it makes 607 horsepower and 553 lb-ft of torque, 27 horsepower more than usual Turbo S. This is enough to allow the car to hit 60 MPH in 2.8 seconds and hit a maximum top speed of 205 MPH. These numbers can also be achieved by the regular Turbo S. However, the Exclusive Series will hit 124 MPH in 9.6 seconds, 0.3 seconds faster than its counterpart. Thanks to these numbers this will remain the fastest 911 in production until the GT2 RS will be released. The car is capable of this performance mostly thanks to its standard all wheel drive system and dual-clutch PDK automatic gearbox.

Dodge released the all new SRT version of the Durango for the 2018 model year. This made it the most …