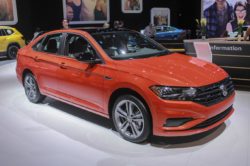 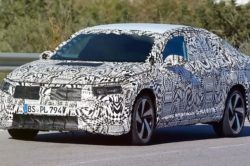 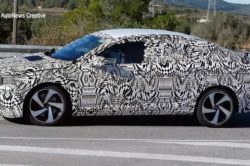 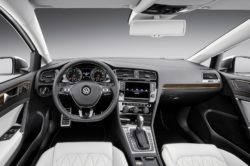 Volkswagen released the new Golf back in 2012 as one of the first cars to use their new modular MQB architecture. The Jetta, the sedan version of the Golf, hasn’t really changed much since 2010. Unlike the Golf, the current model is still using the same PQ architecture as its predecessor which is rather old at this point. Things are about to change though. Not that long ago they showcased a teaser for what it looks to be the upcoming 2019 Volkswagen Jetta. Even though the details are still scarce, there are a few things we know about this future model. For starters, the new Jetta is going to boast VW’s MQB architecture, so it will be more structurally sound than before while also being lighter. This should translate in better NVH levels, a nicer set of driving characteristics and hopefully a more comfortable ride.

With the new platform, VW is also going to change the suspension system of the car. As the new platform is stiffer, it looks like VW will now start using a torsion-beam rear suspension on some of the lower end models of the Jetta. This will reduce the car’s cost but it will also make it less comfortable than otherwise.

Even so, it should still be well above the average of its class which is what matters at this point. The new platform is also likely going to bring a longer wheelbase but unfortunately VW decided not to confirm this just yet. Even so, from the render they showcased it is quite clear this is true. The new car also looks taller and wider which should help it with the interior space.

Read More:  2018 Suzuki Jimny - Furthest Thing From the Cliché That Exists in the Automotive World

It looks like the manufacturer will release the 2019 Volkswagen Jetta in January at the Detroit Auto Show. The car will then go on sale in Europe in a short while and it should hit the US market pretty soon too. Its price is likely going to hover right around $18,000 for a base model, thus making it cheaper than a Golf.

Even though the teaser shot isn’t as well lit as we would have hoped, we can still see a few interesting details about the 2019 Volkswagen Jetta. For starters, the car seems to use a brand new hexagonal grille which we haven’t seen in any of VW’s other cars.

The headlights are also considerably different being short and stubby and slightly angled towards the grille. The bumper on the other hand looks quite similar to that of the old Polo which is definitely an interesting choice. From the profile the new Jetta doesn’t really look all that different from its predecessor but once again, the longer wheelbase is definitely clear here.

Considering what happened with its predecessor, it would be safe to assume the 2019 Volkswagen Jetta will get roughly the same interior as the current Golf. We can expect the two cars to share the same dashboard design as well as a really similar set of features. There will be some differences though.

For starters, the lower center stack is likely going to be slightly different for the Jetta. On top of that, the rear seats will get more legroom in the sedan and all passengers should get more headroom as well. The trunk will be quite big and even though this won’t be a hatchback, it should make it one of the most usable cars at this price point.

The base version of the 2019 Volkswagen Jetta is likely going to boast a 1.0 liter turbo-three with up to 115 horsepower. A more powerful 1.5 liter engine with as much as 150 horsepower is also going to be an option. VW will also offer two 2.0 liter engines. One of them will be a gas-powered unit good for over 190 horsepower and 200 lb-ft of torque. The other one will be a diesel which should deliver anything between 150 and over 200 horsepower. All engines will come mated to a 6 speed manual and front wheel drive as standard. A 4Motion all wheel drive system is definitely going to be an option with certain engine choices. It also looks like a 7 speed DSG gearbox will be available across the range.