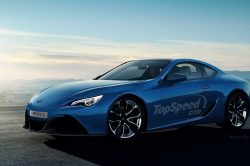 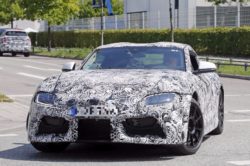 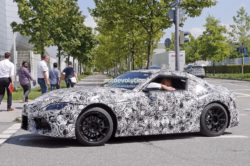 As Toyota tries to reinvent itself with bold styling which we witnessed lately, it also tries to evoke some sportiness in the core of its products, where new TNGA architecture does a decent job for that sake. Things like 86 model (Scion FR-S at first) arrived to remained us that this Japanese brand knows a word or two on pure driver’s entertainment. It also evoked not so distant memories of a lineup full of coupes as Tercel, Paseo, and Solara, which are maybe not worthy of mentioning in the context of sporty, but Celica and MR2 roadster are. But none was as glorious as Supra. It was a GT-R of its time boosting power figures worthy of Ferrari. You see, while bundles of driving joys offered by 86 are a delightful deal, you can’t do anything but grim at its meager 200 hp. Supra boosted 320 hp in 90’s… We want more power! New 2019 Toyota Supra will deliver.

Toyota and BMW teamed up for this one. Actually, Beemer teemed up to offer a new generation of Z4 roadster, while Japanese will use same jointly developed underpinnings for coupe model or Supra. But Supra won’t just simply borrow German turbocharged inline six if you imagined so. But first, if we start from the beginning, supposedly there will be available turbocharged L4 for a start, we would say delivering between 250 and 300 hp.

But we are more interested in the stuff above. That would be V6. Turbocharged of course. It could easily be twin-turbo 3.4-liter V6 from latest LS rated at 416 hp, although there is a rumor suggesting that two mentioned brands are co-developing turbocharged 3.5-liter V6, but that doesn’t make much sense. First Toyota now already has a V6, while Beemer uses inline setup from, well, forever. Creation of new V6, besides existing one, just for purposes of niche model which will never generate high sale figures is contradicting every brain cell of each board member of any automotive brand. But there will a hybrid for sure, as that doesn’t hurt the mentioned brain tissue.

Unfortunately, new Supra will not exactly look like FT-1 concept revealed in 2014. That would be too good to be true… But judging by the spy shots it might prove as hot enough. We will still get those flared haunches, duck-tail shaped rear, double exhaust tips, but fascia doesn’t follow the suit. We would describe the front as an attempt to bring last gen Supra to contemporary times, which is a “legit” move to us. Headlights are sleeker and intake openings are far more aggressive but that shape of the nose is somehow there pushing us into a reminiscing state of mind.

As for inside happenings, so far two different interiors were caught by spy photographers and none tells a particularly good story. Both are visibly pure BMW’s story, despite exteriors are nothing alike. Seats, steering wheel, iDrive controller, even the gear lever is just simply taken from German shelves. Still, those dashes featured different styled center vents, giving us hope that both are decoys and that Toyota will not just glue its badge on Beemer’s cabin. It’s not good for Munich premium image, anyway…

We are not so far away from 2019 Toyota Supra debut. It will probably happen during next year, along with the revelation of the new Z4. And about the price… American pony car offer starts at $26k, but that is 86’s realm and Supra was traditionally way pricier deal than that. We are not sure whether Toyota plans to play humble and offer Nissan Z’s $30k pricing strategy or it could resurrect the old Supra’s price tag. And that old sticker was above $60k in current dollar value! While that price seemed justified at the time, new Supra will be nowhere near as radical or groundbreaking as that old one. And finally, if we were Japanese with a desire to generate any profit from it, we would stay away from Corvette’s, Cayman’s, TT RS’s or F-Type’s pricing territory.