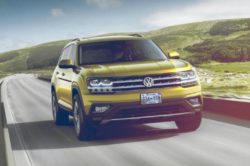 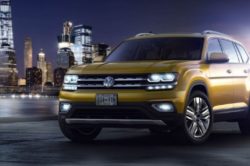 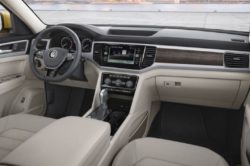 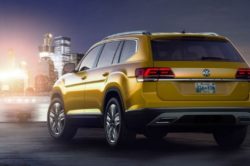 Even though VW has many cars in their portfolio, they didn’t really have a three-row mid-size crossover. The 7 seats Tiguan was just too small while the Touareg didn’t offer 7 seats at all. In order to fill this massive gap the 2018 Volkswagen Atlas was released not that long ago. This is an all new car but it has been in the works for a really long time. In fact the original concept dates all the way back to 2011 which shows how hard VW tried to get it right. The end result is definitely worth it because the Atlas has to be one of the best offerings in its class.

The car is based on the MQB modular front wheel drive chassis, so the front underpinnings as well as most of the floor are the same as on the Passat or Golf. The rest of the car on the other hand is all new. The Atlas is considerably larger than any other MQB platform and much heavier.

The car weighs north of 4,300 pounds which makes it one of the heaviest models in its class. This means that it isn’t exactly the best one in terms of performance or fuel economy. However, the Atlas manages to offer a composed ride, plenty of available space inside as well as a lot of features for the price. The car starts at just over $30,000 with the top end models going for well past $50,000.

Even though the 2018 Volkswagen Atlas has been met with quite a bit of criticism, the car actually looks quite impressive. It doesn’t look like any other VW currently on the road and that is great. It boasts a bulky body, muscular lines on the sides with flared wheel arches as well as a vertical front end.

The large grille, large standard LED headlights or the SUV-like stance make it quite imposing on the road. The body size also means the visibility is great and on top of that the tailgate and rear doors open considerably wider than those of its main rivals.

Here things are a bit more conventional. While the Atlas is not identical to the Passat, it does borrow quite a few features from it. For starters, it get the same climate controls, infotainment system, instrument cluster and even some of the inserts are the same.

There is considerably more space though and there are 7 standard seats on which 7 adults can sit comfortably. The best part is that even when fully loaded with people, the Atlas still offers nearly double the trunk space of any of its main rivals which is quite impressive. The drawback is that the rear passengers don’t get many extra features so it might not be the minivan replacement some people were looking for.

There are just two available engines with the 2018 Volkswagen Atlas but both of them are quite good. The base model gets a 2 liter turbocharged inline 4 gas unit, the same as in the Golf GTI. This offers 235 horsepower and 258 lb-ft of torque from less than 1,800 rpm. The option is a larger 3.6 liter naturally aspirated VR6 engine. This will offer 276 horsepower and 266 lb-ft of torque.

Both of them will use roughly the same amount of fuel and both of them come with similar performance levels. The big difference is that the VR6 can also be had with VW’s 4Motion all wheel drive system while the base model only comes with front wheel drive. The usual dual-clutch automatic is gone. In its place VW decided to install an 8 speed conventional automatic which is considerably smoother than their DSG and not that much slower.