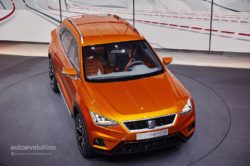 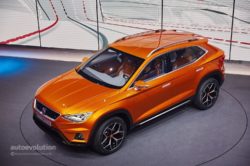 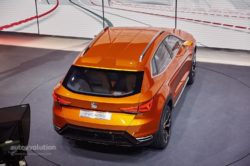 When things are going good, imagination starts to run wild. For crossovers, things are great for quite a while, which gave open space for exhibitions. Emerging of BMW X6 blending SUV with coupe-ish traits is one of those. Anyway, it seems that idea gained its foothold as Beemer added one more of those, Merc joined and Audi is just about to. Still, we haven’t seen any highly rakish roof on any crossover decorated with a mainstream badge, yet. You knew that present status quo is not going to last particularly long and 2022 SEAT SUV-Coupe is a clear example.

We dubbed it as 2022 SEAT SUV-Coupe due to current lack of information as even the bare name is a mystery for now. It is also unknown whether it is going to wear Seat’s or Cupra’s badge, although later carry higher chances of occurring. That’s right, Spaniards are planning to create separate sub-brand, presumably dealing with hot brand products or angry versions of otherwise not so hot products.

Anyway, the introduction of coupe SUV from this Spanish maker is a certainty, as it was confirmed by research and development boss Matthias Rabe for 2022. Size will keep it in the compact crossover segment, where Ateca and its future larger sibling dwell, but this SUV will pack more than enough distinctions to justify its existence.

Giving the stated date of its debut, upcoming SUV in question has serious potential to arrive as a plug-in hybrid, giving how VW Group envisions its automotive future. If it had to arrive today under Cupra’s umbrella, it would be certainly powered by 2.0-liter turbocharged L4 boosting 305 hp as in case of Cupra R model, but it is not going to arrive today so… Anyway, PHEV or not, non-premium brands hasn’t been offering so far sporty versions of their compact crossovers, but they have offered turbocharged four-cylinders boosting around 250 hp, so above 300 hp should come as the norm if Cupra badge gets the job of sitting on the front grille. Plus, luxury brands are already at 500 hp now…

BACK TO THE BEGINNING

Two years ago Seat presented 20V20 concept from which later both Ateca and Arona borrowed styling touches. For our story about SUV-coupe, we have to go back to the same concept as allegedly this crossover is going to use it as its main muse. Compared to Ateca that means significantly more handsome styling with “fastback-ed” rather than “hatchback-ed” tail shape.

Amount of sheet metal used for concept fenders is lesser, so the whole figure is sleeker, although the roof is not especially slopped, more like Audi Q8 recipe than one from Beemer of Merc. Understandable, right? It’s the same corporation after all. Ateca hasn’t actually followed closely concept’s interior ideas, and we highly hope that future sporty SUV will. It looks good, especially that Porsche styled lower console.

Giving that mentioned German brand is ditching buttons in favor of touch-sensitive surface, let this Seat, ups Cupra have it… Overall, this will be very gutsy move from Spanish brand, very first mainstream coupe-SUV, while also a first sporty version of non-premium compact crossover. Unless someone does the same before 2022…

4.7 Introduction Despite currently making only 4 and 5 doors electric cars, Tesla actually started with the Roadster, a 2-door …