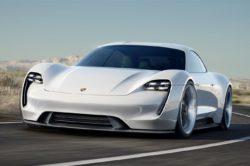 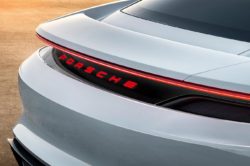 Tesla’s financial success is just too big and bright to be overlooked by others. For whole five years (eternity in automotive world) and no change in near sight nobody had an answer to Model S, and neither somebody had one to Model X. While younger electric SUV is soon to be swamped by adversaries from all sides (Audi, Jaguar, Mercedes, BMW…), nobody speaks much about big electric sedans these days. Does that mean that Model S reign is about to go unchallenged for eternity? Not according to Porsche. Brand’s own workers declined part of their future wage increase and accepted longer working hours in other to make 2020 Porsche Mission E happen. It is that important!

At that time when 2023 Porsche Mission E was still permanently stationed “in the lab”, Dieselgate scandal broke, shaking financial structure of the VW Group which also includes legendary sports car maker. The all-electric sedan was put under question mark as much as all future projects.

Anyway, funds were still there despite all, as enormous sales figures of the mentioned Group from previous years (also boosted by cheating devices), made the bank accounts thick enough and the very automotive conglomerate later decided to clean the image by going “green” (read EV). So, electrified Porsche’s sedan is a big deal as Model S is getting bored all alone out there and last year almost 30k Americans went for it, which pokes all luxury brands directly in the eye.

Future EV will use new platform specially developed for it. Exact one will try use as much aluminum, magnesium, and carbon-fiber as it can or as future price tag allows. For rest of possible specs, we have to turn to Mission E Concept revealed two years ago. And that tells us that two electric motors are in the game with the total power of 600 hp, along with 310 miles of range and 0-60 mph time of 3.5 seconds. How that stacks against Tesla?

Well, driving range is there, just five miles behind, but power figure is modest next to its 762 hp and same goes for acceleration time which in the P100D model with Ludicrous mode happens in “earth-shattering”, “faster than Chiron”, 2.2 seconds. Still, Porsche still has time to up its game and already at the present time Panamera Turbo S E-Hybrid cracks the 3 seconds barrier by certain estimations defying brand’s conservative acceleration time claim of 3.2 seconds. But in one thing Mission E will outshine Model S by far. Supposedly it will be able to charge 80% of the battery in 15 minutes, making range anxiety evaporating from your mind faster than it takes to fill those batteries.

Nobody is sure whether Porsche’s first EV is going to bare Mission E moniker or not, but we know that it should arrive somewhere in 2019, with an estimated price of around $85k matching that of the Panamera. We also know that judging by spy shots it is destined to look hot, not betraying overly striking concept’s physics. It looks like the blend of 918 Spyder and Panamera, and that comes very alluring to us, and incredibly more handsome than in the case when the hyper car is omitted from the mix. Maybe we are getting ahead of ourselves giving that camouflage is very intentive of trickery, so time will tell… And sure, Model S should be worried even if this Porsche turned out to be slower, as it will bring its refinement and build quality into the EV game, which Tesla could probably never attain.

McLaren is planning to release 15 new cars by 2023. It seems that they are working hard on future hybrid …