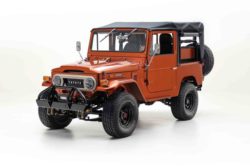 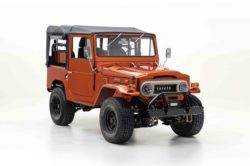 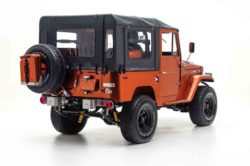 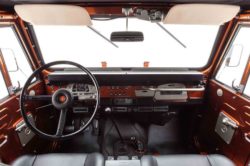 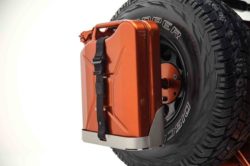 The FJ40 Land Cruiser is one of Toyota’s most iconic models ever made. It was originally released back in 1960 and it has been in production for over 4 decades. Thanks to its popularity there are now companies specialized in upgrading the models to modern standards. One of them is the FJ Company which is based on Florida. Their latest creation is the Toyota FJ40 Land Cruiser, a fully restored model based on a short wheelbase FJ from 1972. Even though the car may look similar to the original, there are very few parts left unchanged. In fact this particular version should be more than capable to compete with any other modern SUV on the market and even go where most wouldn’t.

This is actually a frame-off restoration with modern upgrades. It means that the FJ Company took an original FJ40 that needed restoration, stripped everything down and then repaired whatever was meant to be repaired. The frame has been galvanized, the body has been galvanized and then painted while the entire interior has been replaced. The engine hasn’t been left alone either.

This FJ40 restoration includes a beefed up engine as well as an upgraded running gear. The end result is an original-looking Toyota FJ40 Land Cruiser that is as capable on and off the road as any other modern SUV. As you would expect, this level of craftsmanship isn’t cheap. In fact their cars start from just over $55,000 from a basic restoration and end up at north of $120,000 for something similar to this particular model.

This FJ40 Land Cruiser has been custom built at a buyer’s order to its specifications. The car is actually based on an old Tonka toy but without ruining the classic style. In the front it features the classic grille but with an off-road steel bumper, LED headlights and an LED floodlight bar.

The FJ40 gets classic mirrors that are mounted on the front fenders as well as a soft top. The FJ Company added a color-coded jerrycan, billet aluminum wheels as well as Cooper off-road tires. In order to make it stand out even more, they painted this FJ40 in a metallic orange that definitely makes it pop!

Not much has been altered here when it comes to the design. In fact it mostly looks stock. However, they did improved many things in the Toyota FJ40 Land Cruiser in order to make it easier to use. For starters, there is a new set of bucket seats in the front wrapped in durable vinyl.

On top of that there is a retro-looking radio that supports Bluetooth as well as a Vintage Air climate control system. All of these make the classic FJ drive and feel like any other modern car on the road. Even though they did add a comprehensive roll-cage, the interior space hasn’t been affected that much. There is still plenty of room in the back for 2 or 4 people on the 2 jumps seats mounted on the cabin’s sides.

Well, the Toyota FJ40 Land Cruiser boasts a 4 liter 3F-E port-injection inline 6 engine that has been around for decades. This engine has been restored in order to be just like a new unit. It makes 155 horsepower and 220 lb-ft of torque in stock form. The engine drives all four wheels via a 5 speed manual gearbox and lockable differentials.

The suspension hasn’t been left alone either. This model boasts an Old Man Emu setup which should handle any type of surfaces without any issues. There is also a beefed up power steering system from a newer model in order to cope with the larger than usual tires.

The Toyota Aurion line is due for the new addition, and it seems the 2017 model is going to be …

Crossovers have been on a roll in the past few years even outselling sedans by good margins. Thanks to that …

RAV4 was the one that coined the compact crossover term in 1994. It proved as ingenious move over the years …