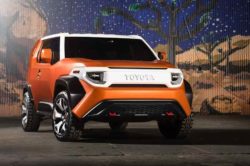 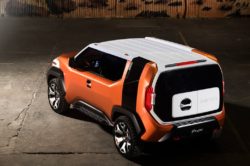 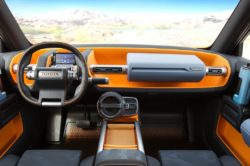 Crossovers have been on a roll in the past few years even outselling sedans by good margins. Thanks to that there are a lot more manufacturers offering some type of crossover. Toyota currently has on offer a good selection of them but it seems they might add anew one. Not that long ago they revealed the Toyota FT-4X Concept, a four-door crossover aimed at those living in the city. They didn’t reveal much information about the car’s underpinnings but they did say a couple of things about it. For starters, it seems the FT-4X is aimed at those looking to get a more capable car than your regular crossover. However, it will still be able to offer all the usual commodities found in a car like this. The FT-4X is expected to be just as great to drive on the road as any of its rivals.

While not official, the car is most likely based on a version of Toyota’s highly modular chassis revealed a while ago. This would allow them to offer the mechanical four wheel drive system with a low-range gearbox they have been talking about. This would likely drive the rear wheels in the base trim level with all the others also getting a front differential for a full-time all wheel drive system. This type of setup would allow the car to still drive great on the road while behaving much better in off-road than any of its rivals.

The Toyota FT-4X Concept is one of the most impressive-looking cars to be released by the Japanese manufacturer in a while. It seems they took design cues from the C-HR and from the now-defunct FJ-Cruiser and made something special. The boxy design and small body make the FT-4X seem the perfect “urban-warrior”.

In the front it has a grille-less design with a shielded lower air intake. There are two red tow-hooks, a bumper aimed for off-road and a set of triangular headlights similar to what Toyota used to offer in the past. The rear doors open just like those on the C-HR with the hidden handles while the big mirrors make the car seem larger than it really is.

The rear boasts an all glass tailgate which will likely not go into production anytime soon. However, the flared fenders and the large chunky tires just might.

Unfortunately Toyota didn’t reveal the interior of the FT-4X likely because the car is not done yet. However, if they will proceed with a production model then we can expect something completely different from all of their other cars.

Things like colored accents on the dashboard, a minimalist design and a set of features similar to those on the C-HR can be expected.

Even though they didn’t say a word about the powertrain of the Toyota FT-4X Concept, most rumors suggest a small-displacement inline 4 engine. Some suggested a longitudinally-mounted 1.2 liter turbo-four offering around 115 horsepower and 130 lb-ft of torque. This would be plenty for the city-dweller while giving the car enough performance in off-road. A 6 speed manual driving all four wheels would allow the production FT-4X to go a really long way. However, this is a Toyota, so a hybrid is more than likely in the cards. Because of that expect it to likely get the same powertrain as the Corolla hybrid which is capable of just over 110 horsepower while delivering great efficiency. It seems that a transverse-mounted engine might still be possible but not with the transfer case Toyota has been talking about. If a transverse engine will be used then expect the four wheel drive version of the car to actually get an electric motor powering the rear wheels.

4.7 Back in December Toyota showcased the brand new C-HR in Japan. The car was later revealed in the US …

Previous model of Toyota Vios was being sold only in China, Brazil and Thailand but we honestly hope 2016 model …