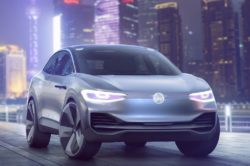 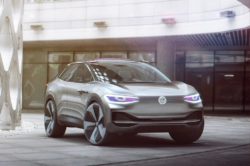 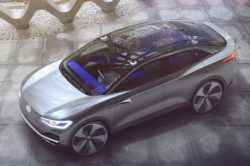 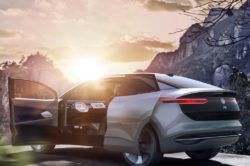 Volkswagen announced earlier this year that they are going to focus on building hybrid and electric cars instead of diesels. This mostly came as an answer to their emissions problem they had a while ago. However, so far it looks like this wasn’t just an empty statement. A short while ago the 2017 Volkswagen ID Crozz Concept was showcased. This is an all electric crossover meant as an alternative to their own Tiguan. The car boasts a sporty design, it has four doors and it is built on an entirely new chassis. In fact VW is preparing 3 new models on their new MEB, or modular electric drive matrix, chassis. This combines the electric motor, or motors, and the battery in a skate-like chassis on top of which the body is bolted on. Not only it allows for more body styles but it also means the cabin is freed up from the clutter built by a gas engine.

The ID Crozz Concept also happens to be Volkswagen’s first coupe-crossover to date. They confirmed the car is nearly as long as a Tiguan. However, it is shorter than it but it does boast a longer wheelbase. Even if they were to release the car now it wouldn’t really have a problem fitting in the current market.

žThe sporty design alone would give it a huge boost over the gas powered Tiguan. The price hasn’t been revealed but considering the performance, it is safe to assume it is not going to be cheap. Early rumors suggest north of $45,000 which would definitely make it a premium product.

The looks of the 2017 Volkswagen ID Crozz Concept are definitely unique. The car doesn’t really look like any other VW currently on the road and that is great. In the front they decided to remove the grille, as it is no needed, but they did give it an aggressive set of headlights.

The rear of the car combines a large hatch-door with a recessed set of tail lights and a blacked out rear area. There is also a small diffuser as well as what seem to be hot-air vents. Its profile actually looks like that of the CC but taller. The doors are big and with the black cladding around the wheels the ID definitely looks menacing. While the production version will not receive the same wheels, the overall design is likely going to be kept very similar to the concept.

The 2017 Volkswagen ID Crozz Concept doesn’t really feature the usual VW interior. Instead it has a collapsing steering wheel, a wide-screen in the center as well as a small customizable screen where the instrument cluster would be.

The unique steering wheel is there because the ID is meant as a fully autonomous vehicle. While the production version is likely not going to feature anything close to it, we are looking forward to the future.

The car features a 225 kW electric motor, likely from a set of two electric motors. All wheel drive is standard and it seems the car will reach a maximum top speed of 180 km/h. Volkswagen also said that with a single charge the ID will travel up[ to 500 km.

This is rather impressive, especially since it would be one of their first new generation electric cars. The battery is going to support fast charging as well with an 80% charge time of around 30 minutes. They didn’t said much about the battery. However, considering the range and the charging rates, it is likely a rather big unit. In fact it might be a 50 to 70 kWh unit which should be more than enough for most people.