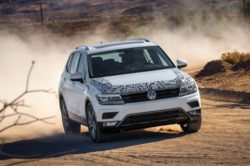 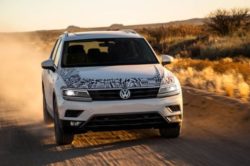 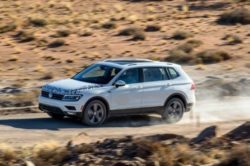 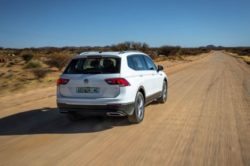 Since its release in the US, the Tiguan has been the most successful European crossover sold there. However, the car was getting dated and sales started to decrease over the years. Volkswagen did release a new version for the Tiguan last year but this was only available in Europe. Volkswagen is going to release a new version with the 2018 Volkswagen Tiguan Allspace. This is in fact the long wheelbase model most people in Europe have been expecting ever since the car was first launched.

The Allspace is based on the same MQB chassis as the regular Tiguan. However, it sports an extra 4.4 inches to its wheelbase and it is more than 4 inches longer than the usual model. Thanks to the extra length, the car can provide a lot more space inside the cabin than before. There is more than 50% extra available cargo space and the passengers can enjoy a much more comfortable ride.

The new chassis is also stiffer and lighter so the new model is not that much heavier than the older Tiguan despite being considerably larger. The price hasn’t been revealed so far. However, it is safe to assume the car is going to be slightly more expensive than before which will still mean it will remain one of the more competitive crossovers around.

There are no surprises here. The 2018 Volkswagen Tiguan Allspace looks nearly identical to the new European model. The only real hint that this is not the regular car is C-pillar area where it sports different windows that are also larger.

In the front it gets the same corporate look with the flat-looking grille and headlights that were first seen on the Passat. The longer wheelbase also makes it look larger than the usual model and closer in design to the Touareg. In the rear the Allspace features the same tail lights, hatch-door, exhaust system and bumper as the European model.

The Allspace comes with 5 seats as standard and with plenty of gear for the price. The second row of seats can slide up to 7 inches so it should be perfect for taller people. On top of that, there is considerably more trunk space than before which should allow the car to be the perfect companion for a family. For those needing more Volkswagen is also offering a 7 seats version. This just adds 2 extra seats where the trunk would be. Unfortunately, because of that it loses most of the trunk so the 2 seats are there just for those needing them at a moment’s notice.

Just like with pretty much all of VW’s cars, the upcoming 2018 Volkswagen Tiguan Allspace is going to feature plenty of engines to choose from. The base model will get a 1.5 liter turbocharged inline 4 unit good for 150 horsepower which is an improvement over the usual short wheelbase car.

The base one will churn out 150 horsepower, the mid-range model will offer 190 horsepower with the top end engine having a rather impressive 240 horsepower. All of them will have to use an AdBlue tank in order to control NOX emissions.