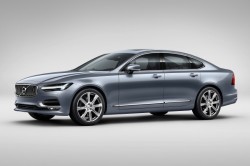 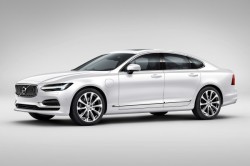 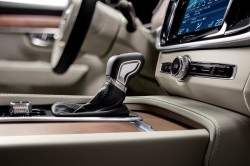 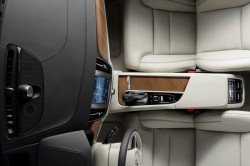 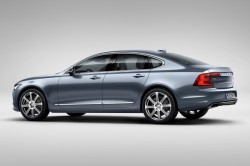 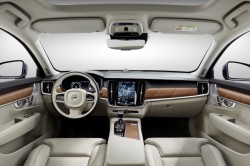 Finally, the long wait is over and we will soon see the famous S80’s successor, in a form of 2017 Volvo S90. After more than successful launch of the XC90, the new S90 is scheduled to go on sale by the end of 2016 and compared to the XC90, the new sedan will be revealed right of the bat, without any tease, whatsoever.

Built to crush the always sharp and ready competition, such as the BMW 5-series, Lexus GS, MB E-class and Audi A6, the new S90 will have difficult task ahead, but given the success of the XC90, we are sure that S90 won’t fail to deliver.

The new S90 will come with three engine options to choose from. The first, most basic engine, will be a 2.0-liter inline four-cylinder engine, capable of producing 240 horsepower, with a maximum output of 258 pounds-feet of torque, mated on the front-wheel drive configuration.

The second option will include a 2.0-liter turbo and supercharged (combined) inline four-cylinder, capable of outputting 316 horsepower, with a peak output of 295 pounds-feet of torque.

We’ve already seen the second option in the XC90, but due to the weight of the XC90, the engine struggled a bit, as the XC90 is able to reach 62 from standing in nearly 8 seconds. This engine might be a better fit to the less heavy S90, where it can show its full potential.

Just like the XC90, the new S90 will be offered with the plug-in hybrid configuration, as well. The same 2.0-liter 316-hp engine will be paired to a battery powered electric motor, with a total combined power output of 400 horsepower, with a peak torque output of 472 pounds-feet.

The new model will share the same Volvo’s Scalable Product Platform with the XC90, which is, of course, expected. Major improvements have been made over the old, dull-looking S80, but it won’t be much different than the XC90, however.

The front will feature beautiful rectangular headlights with triangular outer edges and a hammer-shaped LED lamps pattern, called “Thor’s hammer” by Volvo. The front grill is slightly concaved, featuring the large Volvo logo at the center. At the back, the car features modern, yet elegant C-shaped taillights.

Large LCD touchscreen dominates the dashboard, just like in the XC90. The minimalistic Scandinavian design is present here as well, allowing other elements, such as wood, leather and aluminum trims to increase the luxuriousness of the car.

The cabin is spacious and comfortable. Some of the safety features will include the Pilot Assist, as seen in the XC90, which can auto-steer the car at speeds below 30 mph, but in the S90, the Pilot Assist gets an upgrade, enabling it to work at speeds up to 81 mph.City Safety low-speed forward collision alert with auto-braking is standard in the S90, as well.

The starting price point for the new S90 is around $44,000, which is a good deal, considering what will come with the car in the standard package.

The future is, definitely, here to stay. We are saying that, because we are more than a thrilled by knowing …