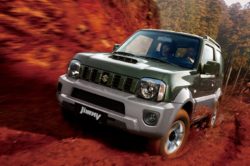 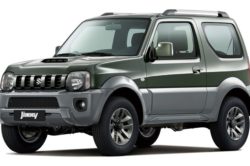 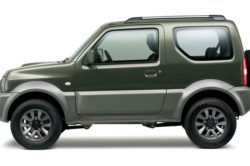 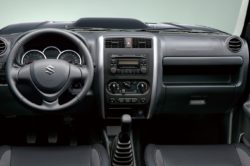 Suzuki Jimny is one “hell of a car”. If you are not already familiar with its concept, we bet it’s hard for you to digest its meaning. First of all, this a tiny (tiny!) car. 144 inches long and 63 inches wide, it comes 18 inches shorter and 6 inches narrower than Nissan Juke. Juke is a subcompact crossover and by your view of the world, it doesn’t get smaller than that. But as you see it does. With modified fenders and bumpers, Jimny even slots under Kei car category in Japan and that is really as miniature as it can get. But check this out. Jimny is not a crossover, that’s Vitara’s job. No, it is full-blooded SUV! And hard-core off-road one! What? You heard us. This little thing has actual ladder frame, solid axles on both sides, a part-time 4WD system with two gear transfer case. And it is probably the smallest car with RWD that you ever heard of.

TWO DECADES SHOULD DO IT

And Jimny has a heritage too. It dates back to 1970, but note that current generation is just third one. What what? That’s right, the first one lasted 11 years, the second one dwelled on the market whole 17 years, while the third one will stick with us for astonishing twenty years.

This smallest SUV in the world is apparently in no hurry, as it never was, but two decades just might be enough for it. Brand new generation depicted in 2018 Suzuki Jimny will probably debut at the beginning of next year and if you read this from the US, no you can’t have it, as Suzuki left those shores five years ago. If you were wondering why would you ever desire such a thing, maybe the UK price of £13k ($17k) provides an explanation.

BACK TO THE BASICS

Despite it had so limited number of generations, Jimny changed over the years. As expected in the begging it was just a metal box as much as Willys CJ-5 (Wrangler’s predecessor) or Defender was. Yet, it was a cute little crate on wheels, more catchy in its appearance than other unimaginative SUVs of the time. The second generation emerged in 1981 and while it kept the rugged visual recipe, it diluted initial charm. Current third iteration surfaced in 1998 and it brought a new styling chapter. Long before Juke or Countryman were even born as an idea in the heads of its designers, Jimny was there all funky and groovy and simply delightful. You might as well confuse it with parts of fashionable subcompact crossover bunch, but not for long. 2018 Suzuki Jimny brings back the basics, as far as visuals go.

First, there were spy shots of masked test mules and then images leaked. And no, this is not baby G-Wagen. Japanese turn to their own history as inspiration and early years of Jimny’s second-generation acted as the muse. So, new Jimny will be the boxiest thing that you ever saw, and in a package this minuscule it just burst with a tough character.

Or cute one. It is just funny to see how this cheap and off-road oriented product just happens to nail some center in our brains triggering alluring thoughts. And interestingly, for the first time, Suzuki applied the same recipe for the cabin. Interior is currently cheap and dull, but it will soon become cheap and very cool. The leaked photo reveals that it will still be assembled from trashiest plastic bits that you can imagine, but several neat moves might as well let you forget that.

Dash on the passenger side has a grab handle with visible bolts, while instrument cluster is made of two separate and square shaped analog gauges (with visible bolts!), which we probably haven’t seen from the 80’s. Finally, infotainment screen housing is shaped as 70’s small TV and it just doesn’t get cooler than that.

Be pleased to know that Jimny is determined to preserve its weirdness in total. The body on frame chassis remains, as well RWD, presumably solid axles too and 4×4 system with low range gearing. Currently, it is powered by 1.3-liter L4 with meager 84 hp paired with 4-speed automatic or 5-speed manual, while 0-60 time takes an eternity to finalize (14 seconds with manual and unbelievable 17 seconds with automatic). The powertrain of the successor in unknown yet, but we would be pleased if turbocharged 1.0-liter L3 rated at 111 hp with the 6-speed automatic from the Baleno makes the cut, as that could give “some” peppiness to this small SUV. So, this new little cubicle will burst with the character when it arrives, it will hide underpinnings worthy of Wrangler, and all that for almost a half of the price of better equipped Renegade Trailhawk. It always was, and it will continue to be a pure gem, nothing else.