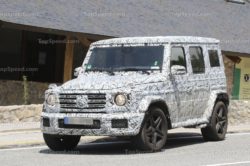 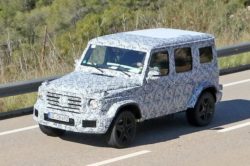 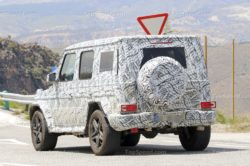 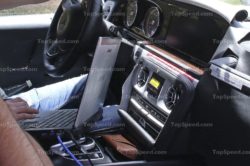 Even though it may be hard to believe, the current G-Class has been released back in 1990. This makes one of the best selling luxury SUVs nearly 3 decades old at this point. Even though the car would likely still sell incredibly well, it looks like an update is already on its way. In fact the new model has already been spied a few times now and the changes seem quite intensive. With this new model, the 2018 Mercedes-AMG G63 is also going to be released. At this point it looks like this will be the car’s high performance version for a while. Unfortunately it still is unclear if Mercedes will release the G65 once again.

The camouflaged prototype spied a while ago seemed pretty much ready for production. While at a first glance the car seems mostly identical to its predecessor, there is more to it than just that. For starters, the new version of the G63 is going to be based on a new platform. This will make extensive use of aluminum and high strength steel which should allow it to shed as much as 900 pounds of weight.

The new model is also going to be noticeably wider than its predecessor as well as slightly lower. Considering how close the car looks to production, it is safe to assume it will be released in the upcoming months. Its price is likely going to hover around $140,000 which will make it one of the most expensive SUVs on the market.

One of the biggest selling points of the G-Class has always been the way it looks. We can safely say the 2018 Mercedes-AMG G63 will sell at least as well as its predecessor. This is because the car looks mostly the same as before, at least at a first glance.

On top of being wider and lower, it looks like the new G63 will feature a more rounded front end. It still has the usual round headlights but the grille, bumper intakes and even the unusual hood are considerably rounder than before. The car’s rear end on the other hand seems roughly the same as that of its predecessor which is reassuring.

Even though the car has yet to be released, the camouflage test mule also had a complete interior. Thanks to that we can get a much better idea as to what to expect. It looks like the 2018 Mercedes-AMG G63 will feature a similar dashboard layout to the E-Class with the twin-LCD screens and the really wide center stack.

However, in this particular application, the air vents will be mounted lower and the seating position will be quite a bit higher. In terms of materials, and also space, the new model seems far better than its predecessor.

It is safe to assume the 2018 G63 is going to feature AMG’s latest 4.0 liter twin-turbocharged V8 instead of the aging 5.5 liter unit. The engine is expected to offer around 580 to 600 horsepower and north of 600 lb-ft of torque. Not only it will make more power than before but it will also be more efficient. Also, thanks to the massive weight loss and a possible new gearbox, the new G63 is expected to hit 60 MPH in less than 4.5 seconds.