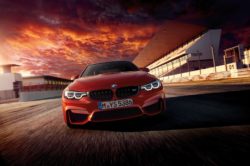 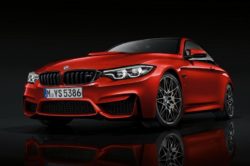 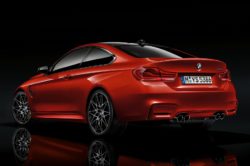 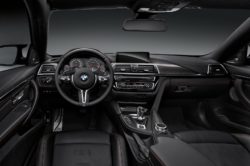 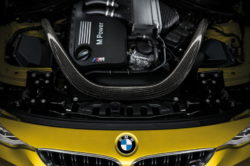 The M4 has been released back in 2014 and so far it hasn’t changed much. A few months ago an update has been released with the 2018 BMW M4 which doesn’t really bring all that many upgrades over its predecessor. However, this update does bring a new performance package but more on that later. The 2018 M4 is just as good as it used to be and even though it still is roughly the same as ti was 3 years ago, that’s fine with us. The car is based on the same chassis as the regular 4 Series but it has carbon fiber composites reinforcing key areas in and around the car. This means it is considerably stiffer than the regular 4 Series which translates in a much better car to drive than otherwise.

The car still sports the same running gear as before and its braking system hasn’t changed either. The base models still get steel discs which are preferred as they do offer much better feel than the optional carbon-ceramic rotors. The new performance package BMW released is the M4 CS.

While the base M4 starts at just under $70,000, the price of the CS has been set at over $125,000. Despite the massive price increase the car doesn’t offer much performance over the regular M4. In fact it still drives the same and most of the parts found on the CS can also be had on the regular M4. It seems BMW released the CS as a model for those that wanted a GTS but didn’t manage to get one as they were so limited.

The new 2018 BMW M4 looks the same as it always did. The only real changes found on the car are the headlights and tail lights. These received new designs for the lights inside and that’s about it. The car still has the same bumpers, exhaust system and even available colors.

The CS is slightly different as it comes as standard with a large front splitter, wider rims with considerably wider stickier tires as well as a full set of carbon fiber inserts. The end result is a more aggressive-looking car that should also be more stable at high speeds.

The main differences over its predecessor is the addition of quite a few illuminated M-logos all around the cabin as well as on the seats. BMW also added contrasting stitching on top of the instrument panel for a more premium look while the infotainment system has been revised with the latest iDrive software.

Everything else has been left mostly unchanged which is not ideal. The CS isn’t much different either but it at least gets new upholstery as well as more supportive front seats which are a throwback to those found on the older E36 M3 GT.

The 2018 BMW M4 still gets the same 3.0 liter twin-turbocharged inline 6 as before. The engine makes 425 horsepower and 406 lb-ft of torque on the base M4. The Competition Package car gets an extra 19 horsepower and the same amount of torque but this time at a higher RPM. The CS on the other hand bumps that to 460 horsepower which is more than enough to make it feel quite a bit faster than the regular model.

When equipped with the dual-clutch gearbox all versions will easily hit 60 MPH in less than 4.0 seconds with the CS being able to get closer to 3.5 seconds in individual tests. The great 6 speed manual gearbox will only be available with the base M4 which is a shame as the CS would have been a great pairing for it.

You are probably blown away by the fact that Tesla Model S breached 2.3 seconds 0-60 barrier. 2.28 second to …

The all-new 2018 Land Rover Defender will represent the next generation of free-range utility vehicles. It will include a whole …