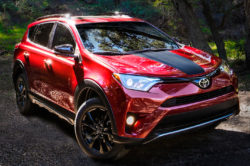 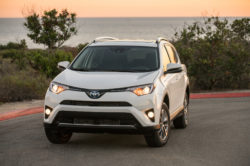 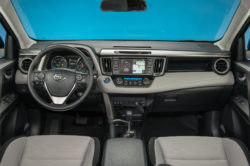 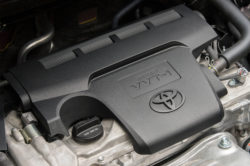 RAV4 was the one that coined the compact crossover term in 1994. It proved as ingenious move over the years and today we have dozens of them offered from all possible marques, mainstream or luxury ones it doesn’t matter. Creator of the game is living through times better than ever, as last year 352k American buyers went for it. That would be its own personal record, but it would be also the segment’s all-time record if Honda CR-V hasn’t found additional 5k buyers for the same year. Besides recent tremendous sales success, Toyota’s compact SUV in current form debuted five years ago, making natural our interests in replacement, which will arrive possibly next year as 2019 Toyota RAV4.

When current model debuted it presented a huge leap over the anemically looking predecessor, but it was still at least partially blunt. Fortunately in 2015 shot of Botox arrived turning fascia into something funky and neoteric, which probably keep those sales figures rolling (among else).

But what about the new one? No spy shots, no teasers, no “nada”. Still, giving the fact that Japanese brand took the high road with extravagant styling (check new Camry or any Lexus), we might anticipate something from same pages for 2019 Toyota RAV4.

As for the cabin, we would love to see same design flamboyance brought by new Camry, while the improvement of used materials and build quality would be welcomed. Incredible spaciousness and quietness of it could just follow through. Finally, big question mark circle around future infotainment system as Toyota still refuses to adopt Apple CarPlay or Android Auto.

There is more stuff that this Japanese brand refuses to do. Well, not actually “refuses” for these two things, but more like rarely applies. First is turbocharging, which becomes ever more present in the compact SUV segment, but our guess is that RAV4 is destined to carry over with naturally aspirated 2.5-liter L4 presumably pumping out more than current 176 hp (maybe 203 hp as in newest Camry). The second thing is plug-in hybrid setup, which brand in question, including the Lexus, offers just in one model (Prius Prime), while there is not even one pure EV.

Still, regular hybrid, which marque offers in bulk, will continue to exist, but it might swap current setup for a new one from latest Camry. That one uses the same 2.5-liter engine, but only one instead of two electric motors, which could raise the power from current 194 hp to 208 hp, despite the motor drop in numerals. That should continue the battle with Rogue hybrid and meet upcoming adversaries as CR-V hybrid and Escape plug-in hybrid. For the end of our future specs speculations, current 6-speed automatic clears the space for the new 8-speed unit.

So, current RAV4 is spacious, very quiet and comfortable, decently priced, reliable, full of safety gizmos at no charge, and decently looking. But also total bummer to drive. Weaker brakes, loads of understeer, overly soft suspension, virtually dead steering feel… Is that going to change? Believe it or not, aspects are bright on this one. Very bright. RAV4 will switch to the new TNGA platform which even managed to make Prius decent in handling department. It also propelled Camry to (for it) never visited echelons of agility and we highly anticipate similar for this SUV. Still, it isn’t going to create too much of a headache for Mazda’s CX-5, but it will give an opportunity for RAV4 to arrive as a complete package for the first time, offering much more for your hard-earned $25k (for a start). Next question. TRD Pro? That would be a bit too much, right? This is still a crossover and famous badge sticks only to certain sheet metal, but the further evolution of current Adventure model might eventually lead to TRD Sport. That might deem as correct enough.

Despite crossovers rule the sales charts, mid-size luxury sedan segment is still packed. Plus, many automakers are working hard of …