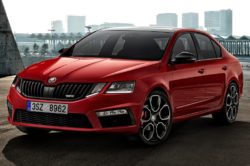 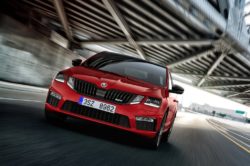 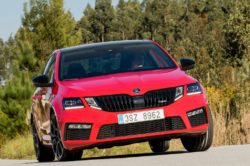 Skoda has been VW’s value brand for a while now but this didn’t stop the Czech manufacturer to release rather impressive cars. One of these is the 2018 Skoda Octavia RS 245, the improved version of the RS 230. It not only gets more power but also considerably more gear as well as a more capable running gear. All of that makes it more capable than its sibling, the Golf GTI, all while costing less and offering more features as standard. This means the RS 245 is one of the best value for money offerings around and it is certainly going to be one of their most successful sports cars to date.

Some of the largest upgrades have been done to the car’s running gear. This time around the RS 245 comes with an improved suspension setup over its predecessor as well as with a different rear axle setup. The latter means the car now has a 38mm wider track in the back. Even though this might not mean much for many, it actually means that the new car will be more stable around tight corners and it should be more stable at high speed as well.

As an option Skoda is also going to offer a dynamic chassis control system. This means the car will receive electronic shocks which will react to the road depending on the selected driving mode. On top of that, with this package the 2018 Skoda Octavia RS 245 is going to be 14mm lower than the base RS version. It will also receive a mechanical limited slip differential which will replace the standard electronic one. The price hasn’t been set up to this point but the car is expected to be slightly more expensive than its predecessor.

Not much changed here in terms of actual design. The car boasts roughly the same dashboard, base instrument cluster and seats. However, Skoda is now going to offer two rather impressive features as optional extras. There is going to be a brand new all digital instrument cluster which will allow the driver to customize it to its own liking. They will also offer an optional 9.2 inch infotainment center with a better hardware than the usual 8 inch system.

Unfortunately there aren’t all great news. The car’s looks have been heavily criticized ever since it was released. This is because Skoda did a rather bold move and departed from the dull design of the previous model. The new car now has four headlights up front with the high beams integrated into the gloss black grille.

There is also a new bumper which sports larger intakes than before. The rear also received a new exhaust system with a subtle diffuser being now integrated into the bumper. As standard the 2018 Skoda Octavia RS 245 gets 19 inch gloss black diamond cut wheels which do set it apart from the rest of the lineup.

Here we can find the same 2 liter turbocharged EA888 petrol engine as before. However, this time around the unit has been revised in order to make 245 horsepower and 370Nm of torque which is a sizable improvement over the outgoing model. A 6 speed manual is standard while a brand new 7 speed DSG is available as an option. So far Skoda only released the performance figures for the manual. With it the car will hit 60 MPH in just 6.6 seconds with a limited top speed of 155 MPH. When equipped with the DSG gearbox the acceleration is more than likely going to drop to around 6 seconds flat which would make it the fastest Skoda to date. Unfortunately an all wheel drive system is still not available.

4.7 The M5 is the original high-performance luxury sedan with its first version being released more than 30 years ago. …