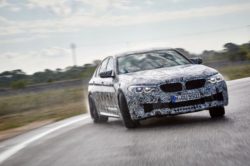 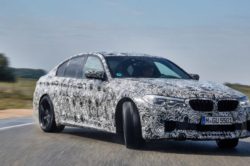 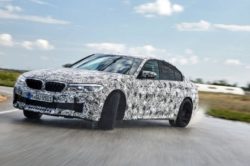 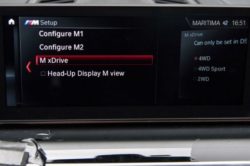 The M5 is the original high-performance luxury sedan with its first version being released more than 30 years ago. Since then the car evolved tremendously with its 6th version being nearly ready to be released on the market. The upcoming 2018 BMW M5 has been driven by quite a few people at this point and the car’s specs have been revealed by BMW. However, its finished design as well as the details have been kept a secret so far. There are a few interesting things about it but more on that a bit later.

Just like its predecessor, the new M5 is based on the regular 5-Series. This time around though it is based on BMW’s CLAR modular architecture. This is an aluminum intensive chassis which also includes carbon fiber inserts in key areas around the car.

The end result is around 90 pounds less than its predecessor with the all wheel drive system installed. This was actually unavailable on its predecessor which is a huge step-up for BMW. The price hasn’t been revealed either but we doubt it will change much over the price of the older car.

The camouflaged 2018 BMW M5 seems to take quite a few design cues from both its predecessor and the new 5-Series. The car seems to have the new more aggressive headlights found on the new car as well as the larger kidney grille. However, it is definitely wider than a regular 5-Series with much wider front and rear wheel arches.

On top of that the hood seems to be quite a bit more muscular than that of its predecessor which is quite interesting. BMW already confirmed the car is going to receive a standard carbon fiber roof which will help it keep its center of gravity down. However, this is not going to be available on the models equipped with the panoramic roof.

There are no major surprises here. The new M5 has exactly the same interior as the new 5-Series sedan. This means it boasts BMW’s new infotainment system and it comes with the minimalist look we all love.

It does have a few upgrades though. The car boasts nicer seats with larger side bolsters and integrated headrests. On top of that there are more upholstery choices than in the regular sedan and BMW is even offering M-specific options such as unique stitching and an “M” division steering wheel.

BMW already confirmed a 0 to 60 MPH time of 3.5 seconds, half a second faster than its predecessor. This is not only thanks to its wider tires and new 8 speed automatic gearbox. In fact all of this is possible thanks to the now-standard all wheel drive system. This has only been confirmed for the US market at this point and it should give the car a huge lead over some of its rivals. A rear wheel drive model or the 6 speed manual previously available on the car are no longer going to be offered in the US. The car may still receive these in Europe but BMW preferred to keep quiet so far. Things might change in the future but for now it seems the new M5 might not be as thrilling to drive as its predecessor.

Even though it may be hard to believe, the current G-Class has been released back in 1990. This makes one …

4.8 After years of rumors the 2018 Tesla Model 3 has been finally revealed a few days ago. Even though …