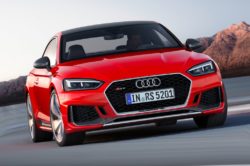 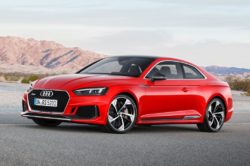 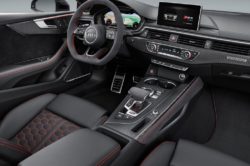 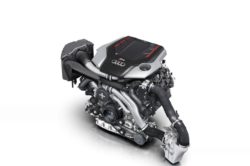 The second generation of the A5 has been released back in 2016 and with it the all new 2018 Audi RS5 which has been revealed earlier this year. Just like the regular version, the RS5 is based on the MLB Evo chassis. This means that it is considerably stiffer than its predecessor, lighter and it does have a lower center of gravity. The RS5 also boasts a new quattro all wheel drive system, a new engine and a brand new look. Like before, the car is going to become available as a coupe as well as a five-door. The cabriolet is likely going to become available at a later date.

Over the regular version, the RS5 sits lower and it does have a different suspension setup. It gets a fully independent multi-link setup front and back as well as a hydraulic anti-roll system instead of the usual anti-roll bars. This is set to reduce body roll to a minimum while also giving the car a much better ride than otherwise.

As standard it comes with 19 inch rims but Audi will offer a set of 20 inch wheels. The car is also 0.6 inches wider which is mostly thanks to its considerably wider tires. The price is still unknown but it will more than likely cost north of $67,000 which is also the price of most of its rivals.

Even though the car is larger than before, it doesn’t really look like it. This is because the proportions are nearly identical to it predecessor. It still gets the massively flared wheel arches, the stubby rear end with the massive dual exhaust system as well as a very aggressive front.

Over the regular A5, the RS5 gets LED headlights, honeycomb mesh in all of its grilles as well as a carbon fiber splitter. The hood is considerably lower than that of its predecessor which should help with the aerodynamic drag.

The 2018 Audi RS5 is not that much different over the regular model. The dashboard and the base seats are identical to those on the S5. However, it gets unique Alcantara upholstery as standard with contrasting red stitching. Carbon fiber inserts, leather seats or even a full leather upholstery can be had as optional extras.

Audi is also likely going to offer a unique set of Recaro seats in order to give the driver a better driving experience without ruining the comfort. The overall set of features is mostly identical to the rest of the A5 lineup which is to be expected.

The 2018 Audi RS5 lost the usual naturally aspirated high-revving V8 in the favor of something a bit more special. The car now gets a Porsche-built and developed 2.9 liter twin-turbocharged V6. This boasts a hot-vee design with the turbochargers between the cylinder heads. Thanks to that the lag has been kept to a minimum without disrupting the power output. In fact the engine, even though it is considerably smaller than the old V8, makes a rather impressive 444 horsepower and 443 lb-ft of torque.

This is 125 lb-ft of torque more than the old V8, all while delivering all the torque from just 1,900 rpm. So far it seems that an 8 speed automatic is the only option. This is a big departure from the usual 7 speed DSG the RS5 had so far. With the new gearbox, the car will accelerate to 60 MPH in just 3.9 seconds while having a top speed of 155 or 174 MPH, depending on the electronic limiter. In the future it is safe to assume an RS5 Plus model will be released. This will likely offer more power and a much higher top speed than the regular model.

Dacia is an honest car maker and it seems that works well for it. Its products are not competitive against …