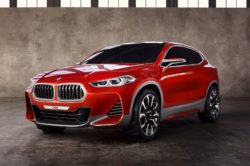 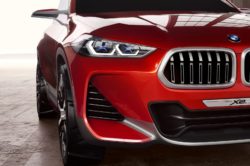 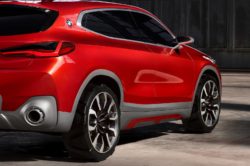 It was just matter of time when BMW’s coupe-SUV blend is going to trickle down to lowest CUV echelons. We had slopped X5 for quite a while, rakish X4 for several years and finally weirdest crossover’s design approach reached X1. Or did it?

OMG, THAT ROOF IS FLAT!

Biggest flavor of any coupe-SUV, very literally applied by Beemer before, is missing with 2019 BMW X2. The roof is not highly slopped as one with X4 or X6, in fact, it hardly has any descent at all. X2 remained faithful to the stuff presented by its concept, all the way to the C-pillar badge, meaning it doesn’t look as coupe-SUV, but it does look like a stylish little crossover. It is lower, shorter, and way funkier with its plastic cladding standing next to X1, and we guess that was an initial idea.

It also looks sportier with a significantly more aggressive front bumper, slimmer lights front and back and 20-inch alloys (if you opt for them). Same sporty flavor exist on the inside, again if you go for it, so you have a chance to end up with Alcantara seats, lots of contrast stitching and special veneers. Besides this options of cosmetic nature not available on X1 and inch less here and there, the cabin is the same, meaning unimaginative in appearance, but very well assembled and comfortable.

Normally, under the skin, nothing differentiates X2 from X1 as in opposite situation its profitability suggestion wouldn’t survive through any board meeting held in Munich any time. The platform is UKL one, which prefers FWD and AWD, while the only caveat is the fact that X2 gets xDrive as standard. There is one engine option (as with X1) which is 2.0-liter turbocharged L4 rated at 228 hp and 259 lb-ft of torque, paired with the 8-speed automatic. X2 should reach 60 mph in 6.3 seconds (as X1 do) and we would be “cheeky” enough to claim that X1’s fuel efficiency (22/32 mpg; city/highway) is going to be replicated here without any deviations.

It is clear that Beemer pokes Mercedes directly into its eye with this thing. Upon debuting, current X1 choose different shape recipe growing significantly in height trying to mimic X3, rather than playing on the cute stylish card as before. So, X1 became generally a better car, but it definitely lost a larger chunk of its visual charm. X2 looks like a groovy little-elevated hatch or exactly how X1 looked before or as Mercedes’s GLA looks now.

Despite X1 significantly outsold GLA last year both in Europe and USA, evidently Munich’s greediness stretch further than that and Beemer probably intends to lure specifically Merc buyers with this. Giving that development of X2 is far from costly, this could prove as a very wise move. Or it could be a foolish one?

2019 BMW X2 should arrive next year with an estimated price tag of $38k (official figure is to be announced), which is two grand above X1 with AWD option or even more without, but there is no coupe-SUV flavor trying to remedy that. It is also $2.5k up from GLA 4Matic or whole $4.5k when there is no power to all wheels. Buyers could just deem X2 as unjustifiably more expensive in general, or if not, Merc’s loyalty might prevail and buyers from X1 could start to migrate here. And that would be bad. Anyway, time will tell…