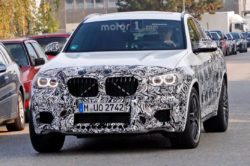 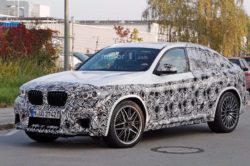 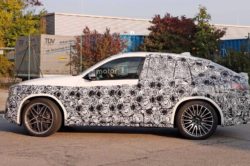 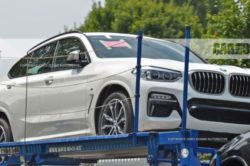 BMW X3 dates all the way back to 2003. And that’s something for a compact crossover. Yet, in all these years it was never treated with M lettering. Its coupe-ish derivative X4 emerged in 2014 and it too never rose above M performance designation. But times have changed. Porsche brought Macan Turbo, Mercedes introduced both variations of GLC in hottest AMG outfits, Alfa recently revealed Stelvio Quadrifoglio, while Audi’s RS Q5 and Jag’s F-Pace SVR are on the way. So, it is definitely not strange why Beemer now decided to shift into the top gear with its compact SUVs. In that sense, X3 will receive M moniker addition, while we are here for the even sleeker deal. 2019 BMW X4 M.

GIVES US THE FIGURES?

Ok, we will. At this moment hottest iteration of X4 is M40i model, which utilize turbocharged 3.0-liter L6 pumping out 355 hp. So it doesn’t pump out enough for the big game. Macan Turbo is rated at 440 hp with the performance package, AMG GLC63 Coupe in S variation delivers 503 hp, while Stelvio Quadrifoglio shoots for 505 hp. Jag’s F-Pace SVR should arrive with 575 hp! Future fully fledged M version will still use same inline six with three liters of displacement, yet one with two turbos.

In case of “regular” M4 that equals to 425 hp, 444hp in case of the existence of Competition package, CS model boost 454 hp, while glorious GTS delivers 493 hp. The last one does that by resorting to port water injection, but don’t be silly expecting that in the compact SUV. If 2019 BMW X4 M emerge with 450 hp figure, it will match little Porsche’s SUV and upcoming RS Q5 based on same hp number estimation, but it will lag behind other fiery compact specimens. Still, a similar power strategy hasn’t hindered any Beemer lately in achieving sublime 0-60 mph numerals.

Before we just cough out estimated arrival date and pricing strategy, you first need to understand something. X4 was revealed in 2014, or three years after second gen X3 model on which it was based did the same. New third generation of X3 is just hitting dealer’s lots, while by the natural order of things, X4 should enter a mid-life refresh.

Still, Munich pushed the pedal to the medal here and X4 in question will appear as brand new generation during this or next year (just three years after its debut!). Expect M model definitely a bit later, but still presumably during 2018, while price should dwell in the north of $70k area, which corresponds to the strategy employed by rivals. But, don’t stop reading now, as we haven’t addressed its visual perspective yet.

No, we are not going to peek through camouflage on test mules this time. The regular version of X4 has been caught naked sitting on a truck trailer, disclosing everything about itself. So, we have new fascia expectedly stolen from newest X3, which implies bigger and more prominent kidney grille and rounder (and goofier) headlights detached from mentioned grille this time.

The side profile has same dynamic creases as new X3, while the highly rakish roof and tail are naturally a special deal. Tail lights are very slim now and same as those seen on M8 GTE racecar, which injects dynamic boost in its appearance. M as always brings aggressive bumpers on all sides, special alloys and probably quad exhaust pipes.

X4 will borrow new X3’s cabin, and again M adds sporty seats, aluminum pedals, special trimming, contrast stitching and so on… Oh yes, M usually influence the design of gear lever too, and we would dare to say that same stick will serve to engage ZF’s 8-speed automatic, as Beemer lately ditches dual-clutches in favor of mentioned one.