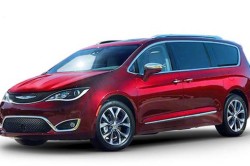 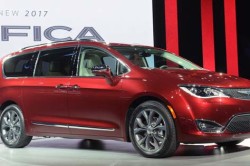 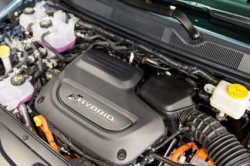 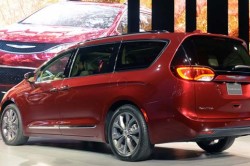 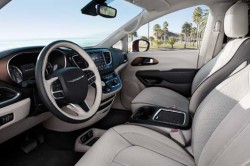 The 2017 Chrysler Pacifica is an upcoming minivan being produced by the Chrysler division of FCA US LLC for this model year. This particular vehicle is designed as a replacement for both the Chrysler Town & Country and Dodge Grand Caravan. In 2015 FCA CEO Sergio Marchionne announced that the company will invest $2 billion in developing a new minivan, and overhauling the Windsor Assembly Plant to facilitate its production.

The 2017 Chrysler Pacifica debuted on January 11, 2016 at the 2016 North American International Auto Show. It will ride on an all-new platform, but it will share similar measures with the outgoing Town & Country. In terms of design, the Pacifica still looks like a minivan, but it will have more sophisticated lines and overall sleeker look.

The new 2017 Chrysler Pacifica will be the first of its class in the United States using a hybrid powertrain, but it will also come with another engine option.

The hybrid version uses two electric motors, which drive the van’s wheels with the help of new electrically variable transmission.

The 16-Kwh lithium-ion battery pack will be capable of going around 30 miles on electric power alone, and Chrysler says it will offer 80 mpg in the city driving.

It also features a plug-in port for recharging the battery, which will take just two hours on a 2s2-volt charger or less than 14 hours on a standard household outlet.

Other engine options will include a 3.6-liter V6, that delivers 287 horsepower and 252 pound-feet of torque. It is paired to a nine-speed automatic transmission (with a dial shifter on the center console) and features engine stop-start technology (ESS), which improves the fuel efficiency of the vehicle.

All version of the new 2017 Chrysler Pacifica comes with front-wheel drive.

When it comes to exterior, we’ve already mentioned that the new minivan is going to be built on a new chassis, which is wider, lower, and lighter than the outgoing Town & Country.

The company claims that Chrysler Pacifica will have the lightest body structure in their class. The base model will weight around 4,330 pound, which is 300 pounds than the Town & Country.

The body of the car really looks great, and the front as well as the rear, are influenced by the 200 sedan. It will feature a 20-inch wheels, unlike the previous models which featured 17-inch ones.

Inside, we will once again see the influence of the Chrysler 200. The new chassis added more interior space, so it can accommodate up to seven or eight passengers, while the Hybrid version is only limited to 7 passengers.

For the first time, the Chrysler will offer a feature called Stow n Go Assist, that allows seats folding with the press of a single button.

The new 2017 Pacifica will feature much larger interior than the Town & Country. Total capacity of the interior will be some 200 cubic feet, and 140.5 cubic feet of cargo capacity.

It will also be packed with many features and technologies. There is a new U-connect theater rear seat entertainment system, 7-inch full color driver information display, 8.4-inch touchscreen, forward collision warning-plus, ParkSense rear park assist, and array of other features.

The new 2017 Chrysler Pacifica will arrive at dealerships in the Spring 2016, while Hybrid version will arrive during the second half of the year. Price has not yet been announced.

4.8 The 2017 Ford Ranger is just around the proverbial corner, and it got a lot of people hyped up. …