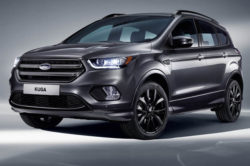 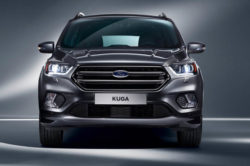 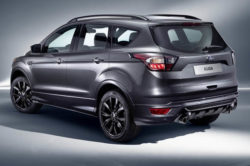 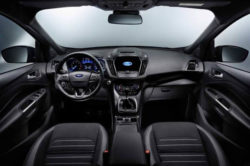 The Kuga is a compact crossover based on the Ford Focus. When it was launched back in 2008, it impressed with its driving characteristics and great looks. In time though things changed. The second generation became a bit more serious and a lot less fun to drive. This made Ford lose some customers but the car still sells well thanks to its looks and general quality inside the cabin. In order to make their customers happier, an update will go on sale in the upcoming months. The 2017 Ford Kuga has been released at the Geneva Auto Show back in March and it is basically the same car as the US Escape released last November.

Being an update means that most of what is under the skin remained the same as before. However, this is not exactly the case with the new Kuga.

For starters, Ford said that the suspension system has been tweaked to offer a better driving experience. If the car is anything like the US model, this means a more comfortable and compliant ride than before which is always nice.

The brakes as well as most of the actual mechanics though remain the same as before. The new Kuga will go on sale most likely around November and it should come at roughly the same price as before.

One of the largest changes for the 2017 Ford Kuga is the way the car looks. While the current version looks a lot like the one before it, the new car is a bit more different.

The back gets a new bumper with a diffuser-like lower construction. The exhaust is a bit more pronounced while the tailgate is new as well boasting more muscular lines than before. The tail lights are the biggest change here though.

Instead of the slim and long construction, these are a bit bulkier and more similar with what the future Focus will receive. The front on the other hand is all new.

The car gets a more aggressive bumper and a new hexagonal grille with two large horizontal slats, a lot more similar to the Edge. New wheels and colors will also be added for the production model.

Unfortunately the interior did not receive nearly as much attention as the exterior of the car. For starters, the basic design here is unchanged. Ford used the same dashboard and layout as before.

The seats have improved and should offer more support while being more comfortable. The steering wheel and instrument cluster are new as well.

Also, the great Sync 3 infotainment system can be had with a larger screen than before which will definitely improve the experience.

The base petrol engines will remain the same as before. This means that the 2017 Ford Kuga will hit the market with a 1.5 liter turbocharged inline 4 with anywhere between 120 and 150 horsepower.

The old 1.6 liter diesel is the big change. This has been discontinued in the favor of a 1.5 liter unit which now offers 120 horsepower. This should be around 5% more efficient than the old diesel while being just as powerful.

The old 2 liter turbocharged diesel will still be available. This will offer 150 horsepower in the front wheel drive application and 180 horsepower for the all wheel drive model. In any case, the diesel will be quite efficient for its class, offering more than 50 MPG on average in any case.

So far hasn’t said much about any other changes. However, a larger petrol engine might become available, especially since there have been customers asking for one. The most probable candidate for this would be their 2 liter EcoBoost from the US version of the car.