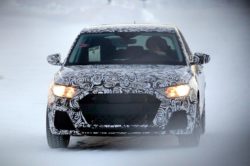 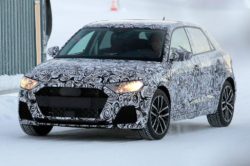 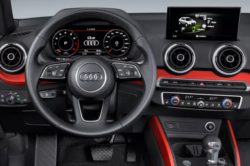 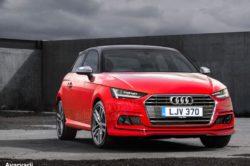 The ongoing A1 is basically a VW Polo with a different skin on top and a slightly better interior. Even though this is the case the car has been quite successful thanks to its really great character and impressive amount of customizing options. At this point the car is getting old so a new model will be released with the 2018 Audi A1. So far the German manufacturer decided to keep quiet about it but the car has been spied testing on the open roads. The camouflaged model was clearly larger than the ongoing model and it also boasted a brand new design. Even though the details are still scarce, the new car will definitely be based on VW’s MQB modular car architecture.

Thanks to the new platform the A1 is set to get longer, wider and possibly lower as well. The wheelbase will definitely increase as well. If the new Polo is anything to go by then we can expect an 80 to 100mm longer wheelbase than before.

The car will also get considerably wider which is clear from the pictures of the camouflaged model. On top of getting larger, the car will get more luxurious than before and it seems Audi will offer even more customization options. Due to all these improvements the price of the car will more than likely increase as well.

At this point it seems most people think the 2018 Audi A1 will get a similar interior to the new Q2. While this would be great, it is highly unlikely. Why? Well, the Q2 has an identical interior to the A3 and it wouldn’t make much sense to offer the cheaper A1 with the same features. Because of that it is safe to assume the new model will build on the success of the current generation.

Things like Audi’s new fully digital instrument cluster, their new MMI infotainment system or a new set of safety systems will be available on the higher end models. Thanks to the wider body and longer wheelbase there will be quite a bit more room inside. The materials are also set to improve by a good margin while the higher end models will get closer to Audi’s larger sedans in terms of quality.

From the spy shots of the camouflaged test mule we can clearly see at least part of the design of the future 2018 Audi A1. For starters it seems like the car will get the same type of grille as the new A8 as well as much slimmer headlights than its predecessor.

The triangular intakes on the sides will accentuate its sporty character. The car seems quite a bit wider while its rear end seems to be closer in design to Audi’s new A4 Avant rather than the Q2 as first thought. The roof also seems to have a slight arch to it similar to coupes which suggests a sportier character than before.

It is safe to assume the new A1 will get a wide range of engines. The base model is expected to receive a 1.0 liter turbo-three good for anything from 90 to 120 horsepower. A larger 1.5 liter turbo-four with up to 150 horsepower is also going to be available. The car will also receive at least a couple of diesel engines ranging from less than 100 horsepower all the way up to north of 150 horsepower. Higher performance models, such as an S1 or even RS1, are to be expected. These will likely offer well north of 200 horsepower with some of them coming with all wheel drive as standard. All the regular models are going to receive a 6 speed manual as standard while VW’s new 7 speed DSG will be an option for sure.