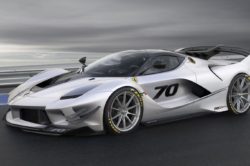 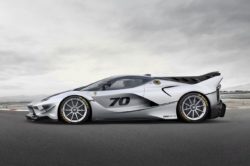 Ferrari was always all about the racing. In 1983 288 GTO was born, purely as a homologation series necessary was participation in new Group B Circuit Race. Yet, that racing series never materialized, and while brand had many other to devote itself to, this beefed up 308 GTB started a new line. A line that later gave birth to F40, F50, Enzo and LaFerrari, so you know that we are talking here about the maddest, priciest, most powerful Maranello products of all times. Still, as we said, “prancing horse” has racing tarmac in its blood and in the beginnings, Enzo Ferrari (the men, not the car), viewed the street-legal versions of its cars as an afterthought. So, this Italian marque nurturers FXX story and 2018 Ferrari FXX-K Evo is the latest chapter. Yet, it’s not so simple.

In 2005 famous marque brought FXX to the light. It was based on Enzo, but it had bigger engine, more power, more torque, higher rpm line, humongous rear wing and quad exhaust tips in the place of tail lights among else, while it missed everything that you wouldn’t need on a track including headlights, interior, or windows capable of normal opening (again among else). Still, it wasn’t a race car. Not at all… It was a prototype not constrained by any rules imposed by transportation laws or any racing authority.

The car cost more than two and half million US ones, and even if you bought it you can’t park it in your garage. You can’t even take it to the track when you want or where you want. It stays with its “mamma”, which grant you custody over it only on certain track day happenings which she deems as appropriate. On the bright side, you are used as “lab rat” in Ferrari’s testing of its latest technology, and there not many of you “guinea pigs” around (38 at the beginning). Later FXX was succeeded by FXX-K based on LaFerarri and now we came to 2018 Ferrari FXX-K Evo.

WHAT IS EVO THEN?

Good question. If FXX-K was based on LaFerrari on what could be possibly FXX-K Evo be based upon? Well, the same LaFerrari. Evo is the “evolution” of FXX-K which should try to push even further existing boundaries of the automotive world. FXX also had its Evoluzione chapter in 2009 when special kit brought more power, faster shifts, and more aerodynamic trickeries besides else.

Anyway, the story remains the same as with first FXX and all others afterward. It’s yours for a couple of millions (exact figure unknown), but still not quite yours as it stays in the Ferrari‘s hands until certain track day emerge (although there are rumors of bigger liberty for owners). Still, who cares how much above three million dollars (FXX-K price tag) it costs or under which roof it sits… You are here to “hear” about the specs, right?

Unlike the previous Evoluzione, this Evo doesn’t mess with FXX-K’s power figures. It has the same 6.3-liter naturally aspirated V12 matched by an electric motor for the total power output of 1036 hp and 664 lb-ft of torque, along with KERS system used in F1 and 7-speed dual clutch automatic. But don’t worry there some novelties here and almost all are determined in messing with moving air.

You can easily visually distinguish new and now “complete” rear wing, huge central fin merging with it, gaping holes at the back, “tunnels” in the front bumper decorated by dive planes. There also other changes which you can’t instantly see as tweaks to the diffuser, suspension and underbody area, while weight drops down a bit. Overall result? At 124 mph 1410 pounds of downforce or 220 pounds more than FXX-K can achieve. Don’t grieve if you own FXX-K, you can upgrade to Evo, probably for not so modest price, but in these echelons money is the least of your concerns.

It has been a busy few years for Nissan, with some serious changes in their lineup – finally, the turn …