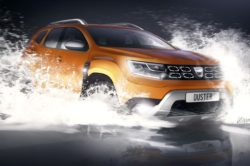 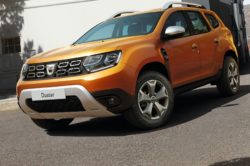 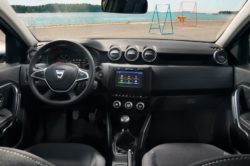 Dacia is an honest car maker and it seems that works well for it. Its products are not competitive against well, all rivals, but they are not even trying so. They are occupying a certain niche that lacks a lot but returns plenty if you are able to view your car just as a pure transportation device. Last year Dacia sold over 400k units in Europe, which is a lot from, let’s say, below 30k in 2005, meaning that bunch of people just want to move from A to B without breaking the bank. Still, that shouldn’t mean that Romanian car maker has to abstain from any kind of flavoring, being it a cheap one also, which is evidently and finally acknowledged with the introduction of the new 2018 Dacia Duster.

The outgoing model was introduced 8 long years ago and even when it debuted it was far from being a looker. There is always a sense of gloominess when Dacia is about to reveal the new model, as we all know that shape is not so prone to change, side profile mandatory stays completely the same, and all play is reduced to plastic body parts and lights. It’s similar story now, but Romanians applied some clever (mainly cheap) tricks to mitigate our sorrow. The accent of the front and rear bumper is now silver colored along with skid plate (but only at the front) and same paint covers mirrors and roof rails.

Side profile finally received some attention being flavored by the dynamic line connecting fenders, some off-road inspired plastic cladding rising toward A-pillar and B-pillars completely blacked out. Other work was done with a dynamic hood, reshaped rear bumper and tail gate, a bit slimmer headlights with LED daytime strip, new grille executed in latest brand’s fashion, finally nice looking alloys (17-inch ones) and square tail lights (we would say Inspired by Jeep Renegade’s). Overall, it still doesn’t deviate too much from the predecessor, but this is certainly best of Dacia’s effort in the visual department so far.

The car maker has not released photos of the cabin yet, but we have some facts to entertain us. Interiors are Dacia’s sore spots, covered in cheap plastic, devoid of refinement, comfort, and latest technology. Yet, some of that is going to be addressed, as an upgrade of infotainment system should include Apple CarPlay and Android Auto, and for the first time, soft-touch plastic should find its way here.

We also hope that present dreadful design of it is going to see some serious improvements and brand’s press release promise so. Euro NCAP crash test rating is expected to remain rather average, currently is poor with three stars, despite added safety pack with automated braking among else could improve the score. Despite rumors that seven-seat Duster is in preparation and that same trend is getting momentum with compact SUVs, company’s official rejected the claims.

Dacia’s budget for development is significantly tight, and there is no neat and cheap trickery that you can pull of in the engine department. Duster is still going to use turbocharged 1.2-liter petrol engine and 1.5-liter diesel as before, though with possibly slightly tweaked output, but we don’t anticipate any big changes on that front. The platform is expectedly the same one and road manners should also pretty much mimic those of the outgoing model. Precise specs about the car are yet to be revealed, just don’t get too excited about it.

2018 Dacia Duster will officially debut during Frankfurt Motor Show just in front of us, while it will start to hit the old continent’s streets during next year. As we mentioned, we praise shown Dacia’s effort in highly limited conditions, but Duster is still Duster and it is unlikely that you will point a finger towards it in express of desire. It’s still the same girl, but this type it put some makeup on, and we all know how much cosmetics could prove deceiving. For those rather indifferent toward cars, but still in need of traveling, starting price just short of £10k ($13.2) in the UK, or half from other compact SUVs is plenty enough besides thin beauty cover.

This is a first SUV Subaru made after Tribecca production being stopped in 2014. Even though its name has not …