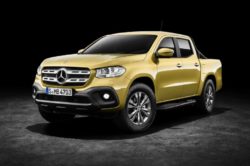 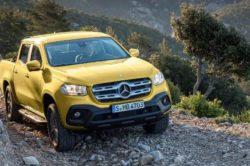 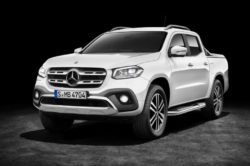 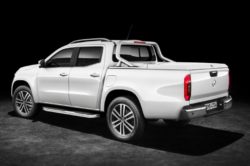 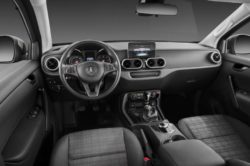 Mercedes is set to release a brand new truck with the X-Class pickup. This has been first confirmed last year but the truck was actually spied testing numerous times since then. More recently they actually started offering teasers for what is about to be released as the 2018 Mercedes X-Class. So far the teasers showcased really vague pictures of the truck. However, more recently these showcased most of its front end which seems to be quite impressive at this point. It looks like the X-Class is going to be just as good as the first rumors suggested it is going to be and that it is not an easy feat to achieve.

While it is branded as a Mercedes, the X-Class is actually using a Nissan-supplied platform. The truck is based on the same chassis as the Navara truck. However, there are a few differences between it and the Nissan. For starters, the Mercedes is wider and more luxurious than its sibling. On top of that the truck is expected to boast more power as well as better on and off the road capabilities. These will be achieved with its highly capable running gear.

At this point it looks like the 2018 Mercedes X-Class is going to boast an air-suspension system at least on the higher end models. Also, a fully independent front and rear suspension setup should allow it to shine both on and off the road. The only real drawback of this setup would be the added weight. The Nissan is not that light either so the added weight of all the extra gear would make the X-Class one of the heaviest on the market. Luckily it looks like Mercedes might use aluminum in some key areas in order to keep the truck’s weight to a minimum.

The design – news before reveal?

As we said, the truck has been teased numerous times so far. However, just a short while ago the latest shots of the new 2018 Mercedes X-Class were revealed and these look impressive to say the least. For starters, it seems the truck will be very similar to the original concepts showcased earlier this year.

In the front it looks like the truck will boast roughly the same type of grille and very similar headlights to those of the concept. However, the bumper will likely be more similar to Mercedes’ other cars on the market. Expect silver aluminum front and rear bumper shields as well as extra door inserts meant to protect them in off-road. So far all the revealed pictures of the truck featured the really unusual rear roll-bar which may be offered as standard across the range.

It also looks like some models will boast massive 20 to 22 inch rims wrapped in all-season performance tires. A version of the truck sporting off-road tires might also be revealed at a later date. In the rear it looks like the tail lights on the truck will be the same vertical units that can be seen on the original concept.

So far there is still little official information about the cabin of the 2018 Mercedes X-Class. Even so, it is safe to assume the truck will be similar to the test mule spied a while ago. It looks like its cabin will be far less similar to Mercedes’ industrial division.

Instead, the truck is more than likely going to be quite similar to the concept. It might even share some switches as well as its infotainment system with the ongoing C-Class which would definitely elevate the experience inside the cabin.

A short while ago it has been confirmed the fact that the main powertrain of the X-Class will use a 4 cylinder engine. It is safe to assume this will be the same 2.2 liter turbocharged unit currently found in Mercedes’ other cars. This is known to make close to 200 horsepower and well over 300 lb-ft of torque in some applications. They also said a larger V6 diesel is going to be offered. This is likely their well known 3.0 liter turbo-diesel V6 which has been around in most of their luxury applications. With nearly 300 horsepower and over 500 lb-ft of torque, this would make the X-Class the most powerful trucks on the market.