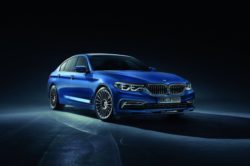 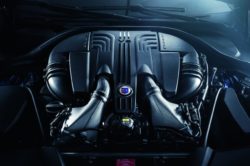 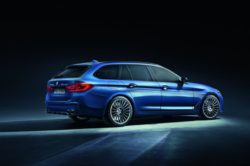 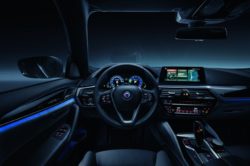 Brutish force or sophisticated strength? Tuxedo or leather jacket? Flamboyance or silent wisdom? Your answers to those questions provide an answer for the next one. BMW M5 or Alpina B5? Yes, that’s the same 5-Series product acting as a starting ground, but its coating couldn’t be more different. And if you ever thought that Alpina rivals M, you couldn’t be more wrong and here is why.

SEEMINGLY SAME, BUT NOT AT ALL…

The first thing that comes into the spotlight with 2018 BMW Alpina B5 is the usage of the same 4.4-liter twin-turbo V8 as in the case of the new M5. Under Alpina’s hood, it produces 608 hp, which is 8 hp above the figures in the M5. So, by now you might already state- “but that’s pretty much the same”? Yes and no. Horsepower number might be the almost the same, yet slightly weaker M5 reaches 60 mph in two-tenths less from B5’s 3.5 seconds.

So, M5 is the faster one? Again yes and no. If you race to 60 mph then yes, if you travel on Autobahn then no. You see, B5 has almost 40 lb-ft of torque extra (590 lb-ft in total) over feisty Beemer and it pulls 16 mph over the M’s top speed of 189 mph. Both share 8-speed automatic supplied by ZF, but B5’s doesn’t lock the torque converter preferring the game of smoothness, nor it ever tries to snap a gear. Further more, Beemer annihilates the corners, Alpina glides fast and dignified through them. So, they both reign in their habitats, M5 on the track, B5 in left lanes.

2018 BMW ALPINA B5 EXTERIOR AND INTERIOR

As much as they differ in ways of delivering enormous power and the ways in which they tackle the curves, that much they are opposite in their appearances. 2018 BMW Alpina B5 is a polite gentleman in restrained, yet tasteful, probably black suit, while M5 might as well be a young man wearing “swagger jacket”.

Alpina doesn’t show at all personal strength and you can recognize it only by lettering, signature 20-spoke alloys, quad exhaust and modest deck lid spoiler. Interior receives more attention from this tuner, but none of it tries to act sporty.

Ultra quality leather in special shades, joined by unique veneers, blue colored instruments dials and some badging. Everything tries to persuade you that this the most refined and graceful way of traveling fast. And it works.

If your essence is polished enough to recognize the purpose of Alpina’s existence you are probably falling under its charms already. But, do know that release date for the US does not exist. It is only available in Europe for a price around $112k. That tops the M5 by more than ten grand, but so far you acknowledged that they share very little and that direct comparison comes as an unnatural affair. They are different worlds and everybody wanting something more from the 5-Series apparently have all choice they can imagine, that is if you are on that side of the pond.

The Elantra has been around for a while but recently Hyundai released a new version for the US market. This …