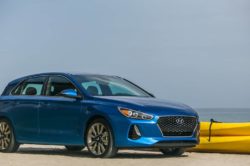 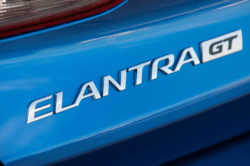 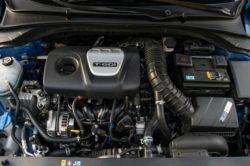 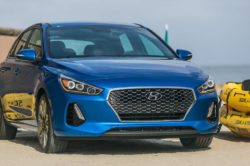 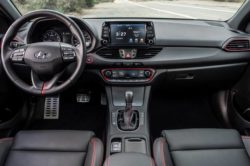 The Elantra has been around for a while but recently Hyundai released a new version for the US market. This is the all new 2018 Hyundai Elantra GT which is actually the same car as the European i30. Even though it is basically the hatchback version of the Elantra, there are quite a few differences between the two cars. The new model is with up to 20% stiffer than the one before it and its platform is actually lighter as well. The running gear has been revised and its engines should provide a far better experience than before.

One of the biggest changes over its predecessor has to be the new platform. The new Elantra GT is not only stiffer and lighter but it also boasts much better NVH levels than its predecessor. Thanks to that the car should be more comfortable as well as better to drive. The base model of the GT sports a regular torsion-beam rear axle which provides a good amount of comfort and control over the car.

However, the GT Sport version gets a fully independent rear suspension which should give the driver far more control over the car. It also gets new spring rates, stiffer shocks and a revised set of brakes. In fact the new GT Sport has to be one of the best to drive cars Hyundai released in the past couple of years. The base model starts at little over $19,000 which is more than the sedan. The GT Sport on the other hand is quite a bit more expensive with a base sticker price of over $23,000.

The base model of the 2018 Hyundai Elantra GT gets a 2.0 liter naturally aspirated inline-four gas engine. With 162 horsepower this is not exactly the most powerful in its class. Even so, it manages to provide a respectable amount of performance and it is one of the more efficient mills at this price point. The GT Sport gets a smaller 1.6 liter engine but this is aided by a turbocharger. Thanks to that it will provide 201 horsepower and 195 lb-ft of torque which is on par with some of the older generation hot-hatches.

Unfortunately this doesn’t really make it hot-hatch material. The base 6 speed manual available with the two engines is quite good but it doesn’t have the feel of a sporty powertrain. The optional 7 speed dual-clutch gearbox is much faster and with it the 1.6 liter engine will shine. Unfortunately this robs the driver from changing the gears manually so compromises will have to be made. In the future the car will also receive a much higher performance model with an “N” model but more on this at a later date.

Over the previous model the new 2018 Hyundai Elantra GT is a much classier-looking vehicle. With this model Hyundai decided to look at their European competitors and draw inspiration from them. This is a great thing as the car simply looks amazing.

The exterior is well proportioned and it manages to shine with the help of quite a bit of chrome and a really imposing grille. The sculpted design lines and the car’s angled look make for an “eager” design scheme which is what the current generation of buyers prefers.

The interior of 2018 Hyundai Elantra GT

Inside the cabin the new Elantra GT is just as impressive as on the outside. The dashboard is nicely laid out and all the buttons are where you would think they are. The materials actually feel nicer than in the sedan while the driving position is lower which makes for a sportier ride.

The Sport gets red-accenting stitching as well as a unique leather upholstery which really elevates the cabin. The only drawback is the smaller trunk but this is alleviated by the large trunk opening which solves most of the issue.