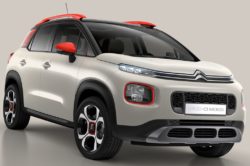 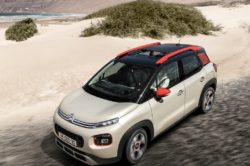 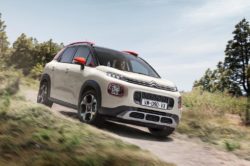 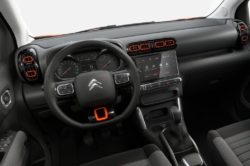 Citroen revealed the all new C3 a while ago which despite its quirky look became one of the more popular cars in its class. Well, in order to build up on its success they released a few days ago the brand new 2018 Citroen C3 Aircross. Just like its name suggests, the Aircross is the slightly taller version of the C3 which comes with even more unique quirks than its hatchback sibling. The car is actually set to replace the older C3 Picasso so it has to be better than the C3 at more than at just looking cool. Despite what most others have said, it seems like so far Citroen has managed to do just that.

Even though it might look mostly identical to the C3, it really isn’t. The Aircross is 4.15 meters long, 1.76 meters wide and 1.64 meters tall and it has a 2.60 meters wheelbase. This means it is more than 150mm longer than the regular C3, 200mm taller and it has a 60mm longer wheelbase too.

The end result is a car that doesn’t really look bigger but that does offer considerably more room inside the cabin which is all it matters in its class. The pricing will be revealed closer to its official release date in the late 2017. The car is expected to be released not just in Europe but likely in Australia as well.

The main reason people are going to buy the 2018 Citroen C3 Aircross will be its unique design. The car looks like nothing else on the road and that will make a lot of people happy. Its design is definitely based on the C3 with the two sharing the same headlights, fog-lamps, hoods, tail lights and even unique design lines on the sides. However, the Aircross is quite a bit bulkier than its hatchback sibling.

For starters, the car boasts black impact plastic inserts on its fenders, side-skirts as well as front and rear bumpers. The front bumper also includes a silver insert which is there to protect the radiator behind it. The car also has much larger windows and doors than the C3 and it features a new C-pillar design which really makes it stand out. Like with the C3, the Aircross can be customized in many different ways with colors, patterns and different wheels in order to allow the buyer to get a unique car.

Unfortunately things aren’t as interesting on the interior as they are on the exterior. The 2018 Citroen C3 Aircross is not much different from the C3 despite having quite a bit of extra headroom.

The dashboard is dominated by the rectangular design inserts on the HVAC vents, buttons, steering wheel and even infotainment system which doesn’t really look like it belongs on the dashboard. The best part about the car remains the extra space and the much larger trunk which makes it a class leader.

There will be 3 different petrol engines as well as 2 different diesels. The base model will come with an 82 horsepower naturally aspirated gas engine. Further up the range the Aircross will get either an 110 or a 130 horsepower turbocharged mill. All 3 will be available with a manual gearbox but only the higher powered ones will also get a 6 speed automatic. The 100 and 120 horsepower diesel engines are only going to be available with a manual gearbox with only the higher powered one being available with a 6 speed unit. The biggest downside has to be the lack of an optional all wheel drive system. All models will come with front wheel drive while some will receive an ABS torque vectoring system which won’t make a huge difference.