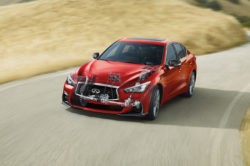 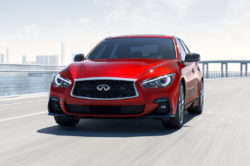 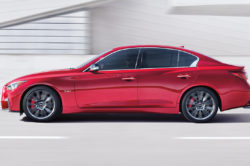 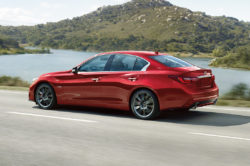 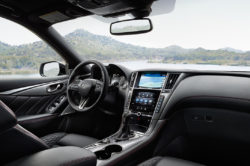 Not that long ago the 2018 Infiniti Q50 was released as a mild facelift to a car revealed more than 4 years ago. Unfortunately the changes have been kept to a minimum but even so the new Q50 should be a great alternative to those looking to get a German executive sedan. The car comes with the comfort offered by these while offering a great chassis for usually a lower price. For now the price of the new Q50 is still under wraps but it looks like the pricing scheme will be revealed later down the road. The cars are actually set to hit dealerships later this summer, so the price shouldn’t be that far off.

With a new pricing scheme, Infiniti also released a new set of trim levels. Instead of the usual “Base” model the manufacturer is now offering the “Pure”. Even though the details are still scarce, it looks like not much will change for this. The price is still expected to cost around $35,000 which is in the lower end of its class.

The older “Premium” model has also been replaced with the “Luxe” which, just like its name suggests, is aimed at the older buyers looking for a great value for money executive car. The “Sport” and “Red Sport” models will go mostly unchanged which was expected considering both of them have been around for less than a year.

The 2018 Infiniti Q50 is still based on the same FM chassis as before. This means the car will still use the same independent suspension setup which is actually one of the better in its class. This is known to offer great feedback while not altering the comfort all that much.

The regular electric steering rack looks like will be a standard offering as well so that’s refreshing to see. Also, Infiniti’s really unusual steering-by-wire system will likely be an option across the range. This not only boosts efficiency but it also makes for a faster steering input. The drawback is that this system can only offer so much feedback through its electric feedback motors, so it isn’t that appealing for many.

The design of  Infiniti Q50

One of the biggest changes with the 2018 Infiniti Q50 is the way the car looks. Even though the differences have been kept to a minimum, there is no doubt about the fact the facelift does look better. For starters, there is a new grille in the front with a more pronounced 3D effect which has also been used on the Q60 coupe.

On top of that the bumper is all new. This boasts new fog-lamp housings as well as a new larger air intake in the center. The range-topping Red Sport also gets a small carbon fiber splitter and black accents instead of the usual chrome. The rear of the car on the other hand hasn’t changed as much. Here we can see a slightly different bumper, sporting new exhaust tips, as well as different LED tail lights but that’s about it.

The cabin of the 2018 Infiniti Q50 is mostly the same as before. The manufacturer announced the faux-leather on the dashboard as well as on the lower part of the doors should be far better in terms of quality than before. On top of that they also announced new wood-inserts for the “Luxe” edition models.

Unfortunately though it looks like the infotainment system has been left unchanged which is unusual considering some of their other vehicles have received upgrades. The only design change is the steering wheel which has been taken straight out of the Q60 coupe.

The 2018 Q50 will hit the market with 3 different engines. The base 2.0 liter turbo-four is going to offer 208 horsepower which is in the lower-end part of its class. A good choice will be the larger 3.0 liter twin-turbocharged V6. This will boast 300 horsepower in the regular models and as much as 400 horsepower in the Red Sport version of the car. A hybrid will also be available for those who want it but take into account this will only get 34 MPG on the highway which is quite bad by today’s standards. The best part about the car remains its standard RWD and its great 7 speed automatic.

4.6 Since its release in the US, the Tiguan has been the most successful European crossover sold there. However, the …